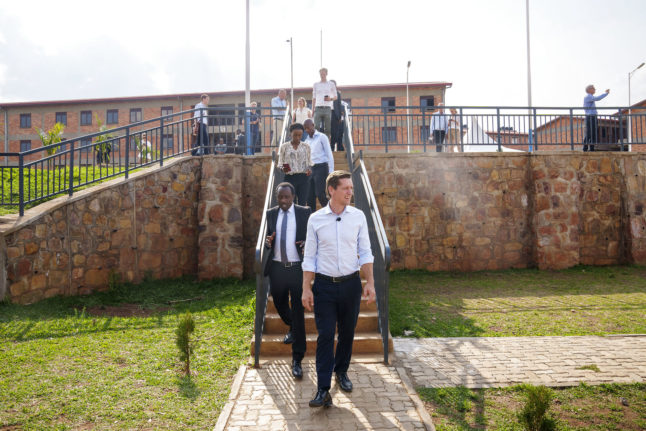 Frederiksen, now the caretaker PM after her government stepped down on Thursday, is currently leading negotiations to form a new Danish government.

The Social Democratic party leader is in a strong position going into talks after the ‘red bloc’ of left-wing parties won a single-seat majority in Tuesday’s election.

She has confirmed she will seek to form a government across the centre, in line with a pre-election pledge.

“What we will being doing, completely practically, is to invite all parliamentary parties and naturally also the North Atlantic mandates to Marienborg on Friday. The parties will be invited in order according to size,” she told broadcasterTV2.

Senior political editor with TV2 Hans Redder has noted that there are several potential combinations of parties – involving the centrist Moderates (‘M’), the centre-right Liberals (‘V’), the centre-left Social Liberals (‘RV’) and the social democratic Socialist People’s Party (SF) that could give Frederiksen a workable centrist majority.

The Liberals, normally the main opposition party to a red bloc government, are unlikely to govern with Frederiksen, according to an expert.

“There will be negotiations, and the Liberals will come to these negotiations, but they will not last very long,” political scientist Rune Stubager, a professor at Aarhus University, said at a press briefing on Wednesday.

This leaves the Moderates, Social Liberals and SF.

Reaching an agreement with one or more of these parties could force the government to reconsider its divisive plan to set up an asylum facility in Rwanda.

Lars Løkke Rasmussen, leader of the Moderates, believes international blowback for a centre in Rwanda would be serious, he said in a TV2 debate prior to the election, while the Social Liberals have said they won’t support a government that moves forward with the project.

“The Social Liberals have said they do not want to support any government continuing the plans to work to send asylum seekers to Rwanda,” Stubager said.

The issue has “been lurking in the discussions” during the election campaign, he said.

The government – now the caretaker government – is “allegedly rather close” to closing a deal with Rwanda for the asylum facility, Stubager said.

“The question is, to what extent [the Rwanda plan] is realistic and whether any refugees will eventually end up in Rwanda, that remains to be seen – there’s a lot of scepticism about that,” he said.

The Social Liberals are “very much opposed to this and they have said that they will not support a government that even continues working with these plans,” he said.

“That will be one of the tough issues for the negotiations that will now go on,” he said.

Moving part of Denmark’s refugee system offshore to a non-EU country – confirmed in 2021 as Rwanda – is a long-term objective of Denmark’s Social Democratic government.

The plans entail Denmark sending asylum seekers to Rwanda, where their cases would be processed by Danish authorities, instead of allowing them to live in Denmark.

The government has said the plan will reduce people smuggling to Europe and thereby help to reform what it calls a “broken” European asylum system.

Negotiations between the two countries over the specifics of such an arrangement remain ongoing.

On Monday, newspaper Jyllands-Posten reported it had obtained internal government documents that appear to counter politicians’ assessments of Rwanda as a suitable location for an offshore asylum centre.

An initial analysis produced by the Danish government in June 2021 showed grave concerns from agency staffers before the government announced plans for a Danish ‘reception center’ for refugees in Rwanda, according to the report.

“There are reports of torture, inhuman and degrading treatment of detainees in the custody of the authorities. There are no reports that the [Rwandan] government has initiated investigations into these matters,” a Ministry of Immigration and Integration document states according to Jyllands-Posten’s report.