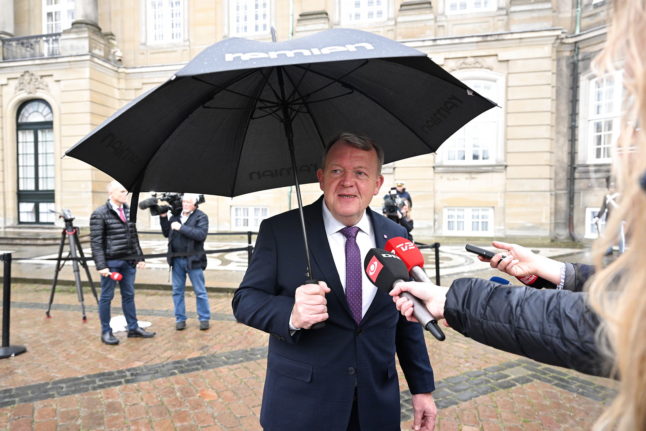 Lars Løkke Rasmussen may have been disappointed with the late twist on election night that deprived him of a kingmaker role, but he will still have a part to play in negotiations to form a new government. Photo: Philip Davali/Ritzau Scanpix

The election result has been reported as a ‘win’ for Mette Frederiksen’s Social Democratic party and the left wing ‘red bloc’ led by her party. It is indeed a victory, and was a dramatic and last-gasp one at that.

You might expect a victory to mean the current government can carry on with Frederiksen as Prime Minister, but that is not the case.

Before the election Frederiksen said her priority would be to form a “broad government” or centre coalition, rather than work with the traditional red bloc of solely left-wing parties.

This means that the current arrangement that props up the government – in which the left-wing parties give the Social Democrats their governing mandate – cannot continue.

In comments after votes were counted Frederiksen said, “it is certain there is no longer a majority behind the government in its current form,” meaning a minority government consisting only of the Social Democrats.

“The Social Democrats campaigned on the basis of a broad government [centre coalition, ed.]. If a majority of parties nominate me as Queen’s investigator, I will see whether this is possible,” she said.

Could the Liberal party really govern with the Social Democrats?

Keeping the above in mind, it is still not impossible that an agreement could eventually be reached between the Social Democrats and other left-wing parties, resulting in a “red-green” government consisting of centre-left and far-left parties (which champion climate causes).

This is not the preferred outcome for Frederiksen.

Senior political editor with broadcaster TV2, Hans Redder noted that there are several potential combinations of parties – involving the centrist Moderates (‘M’), the centre-right Liberals (‘V’) and the centre-left Social Liberals (‘RV’) as well as one with the full ‘red bloc’ – that could give Frederiksen a workable majority.

The Liberals, normally the main opposition party to a red bloc government, are unlikely to govern with Frederiksen, according to an expert.

“There will be negotiations, and the Liberals will come to these negotiations, but they will not last very long,” political scientist Rune Stubager, a professor at Aarhus University, told The Local at a press briefing on Wednesday.

“I don’t think [Liberal leader Jakob Ellemann-Jensen] has any incentives to give concessions and the Prime Minister doesn’t have many incentives either, to give him concessions, because she has the red majority to fall back on,” he said.

Where does the result leave the Moderates?

Because of Frederiksen’s preference for a central coalition, the Moderates “will be part of negotiations” and could even be able to secure cabinet posts if they are willing to “compromise sufficiently”, Stubager said.

But the situation falls well short of what Moderate leader Lars Løkke Rasmussen had hoped for – and looked on course to gain until late on election night.

Without the overall majority for the red bloc, Løkke Rasmussen could have played either side against each other, competing for his party’s seats and giving him a ‘kingmaker’ role.

Frederiksen’s options are improved by the red bloc win because she no longer needs Moderate seats to secure a majority, thereby weakening Rasmussen.

The Moderates may be unable to agree on a government with Frederiksen “because they will then be vulnerable to critique from the right-wing parties,” Stubager said.

Frederiksen “may then switch to a plan B, which I think is more realistic” — a coalition government with various parties on the left, he said.

The red bloc majority rests on two seats from representatives elected in Greenland and one in the Faroe Islands.

Three of Denmark’s four ‘North Atlantic mandates’ went to the red bloc, as they customarily do, with one (the second Faroese mandate) going to the blue bloc.

As such, it would be the blue bloc – and not the red – which would have a one-seat majority if these seats were not included in the overall count.

“It’s thought-provoking that Danes have said they want the chance of getting another Prime Minister. The North Atlantic must ask itself if it wants to decide who should be Prime Minister in Denmark,” Conservative leader Søren Pape Poulsen said during a debate on Wednesday.

Rasmussen also bemoaned the situation, saying, “if you look at Denmark – not the Kingdom of Denmark, but Denmark – there is not a red majority,” he said during the post-election leaders’ debate in the early hours of Wednesday.

One of the incumbent Faroe Islands MPs in Copenhagen, Sjúrður Skaale, wrote earlier this year that he would prefer North Atlantic seats not to be decisive.

Two parties at opposite ends of the political spectrum – climate campaigners The Alternative and national conservatives the Danish People’s Party – both survived the threat of losing parliamentary representation.

Parties must take at 2 percent share of the popular vote to qualify for seats in parliament. Alternative took 3.3 percent and 6 seats, an improvement on their 2019 election result.

The Danish People’s Party, which had 21 percent of the vote in 2015, is now the smallest party in parliament with a 2.6 percent vote share and 5 seats.

Both parties will be relieved not to have fallen under the 2 percent threshold, with polls prior to the election having put them underneath it at varying times.

The high number of parties in parliament – there are now 12, and 14 ran in the election – may be related to the slight drop off in Denmark’s otherwise-high turnout, Stubager said.

“I think this idea of the broad government and also the many parties and the new parties may have confused some voters and really made it more difficult for them and some of them have solved that difficulty by abstaining,” he said.