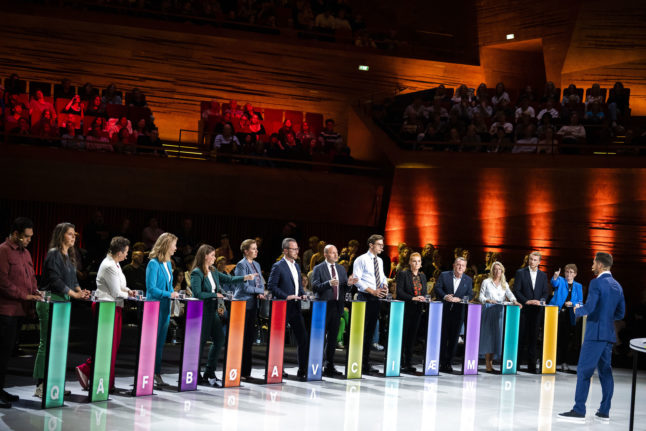 In a political landscape split between 14 parties, polls suggest that neither of the two main blocs can garner a 90-seat majority in the 179-seat Folketing, the Danish parliament.

The left-wing “red bloc,” led by Frederiksen’s Social Democrats are polling at 49.1 percent, representing 85 seats, compared to 40.9 percent or 72 seats for the “blue” bloc of right-wing parties.

“It’s about winning the middle, because the ones who get the middle get the Prime Minister’s seat,” said Kasper Hansen, a politics professor at the University of Copenhagen.

The polls indicate his party will win 10 percent of the votes or 18 seats, a fivefold increase since polls in September gave the Moderates around 2 percent — much to the surprise of political analysts.

And Rasmussen, who boasts solid political experience, has refused to pledge support for either bloc ahead of the election.

Party colleague Jakob Engel-Schmidt said they “are ready to work with the candidate who will facilitate the broadest cooperation around the centre to implement necessary reforms”.

And what the Moderates want to reform is healthcare and pensions.

In their efforts to attract the often less loyal centrist electorate, Frederiksen’s Social Democrats have announced that they want to govern across the traditional political dividing lines. They too have floated the Moderates’ idea of a coalition government gathered in the centre.

“This goes directly opposite to what she’s been saying before, and I think that’s because she senses that she might lose power otherwise,” Martin Ågerup, director of the right-wing think tank CEPOS, told news wire AFP.

Without a clear majority, there may have to be long negotiations before a government is formed after the election, which could ultimately favour Løkke Rasmussen.

“He can basically operate until somebody will get scared enough to point to him and say: ‘Look, yes, you could be Prime Minister'”.

The Social Democrats, the largest party in the country’s political force, are trying to “play the card that they are the right party during uncertain times,” according to Rune Stubager, a professor of political science at Aarhus University.

Their handling of the Covid-19 pandemic was largely hailed, despite a stumble when they ordered an emergency cull country’s huge mink herd over fears of a mutated strand of the novel coronavirus. That turned out to be illegal.

With an economy in turmoil they have since introduced measures to help Danes cope with soaring prices.

They are proposing a carbon tax on agriculture and a pay rise in the public sector, while their allies have campaigned mainly on protecting biodiversity and support for children and the vulnerable.

The current government is negotiating with Rwanda to set up a centre to house asylum seekers, while their requests are being investigated.

Across the political landscape there is a strong consensus on maintaining a restrictive migration policy, meaning the issue is rarely up for debate.

The populist anti-immigration right is expected to win more seats this election, but it is split into three different parties who together receive 15.5 percent votes in polls.