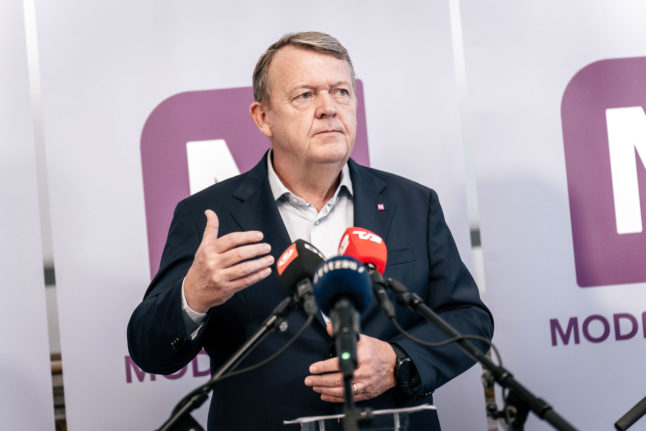 The Moderates with Rasmussen at their forefront have seen polling numbers jumped since the election was announced at the beginning of this month.

A new poll by the Voxmeter institute puts Rasmussen’s party on a remarkable 9.2 points, up from 4.1 points last week and 2.2 percent around the time the election was announced two weeks ago.

A vote share of 9.2 percent would give the Moderates 17 of the 179 seats in parliament, enabling Rasmussen to wield considerable influence in the formation of a new government.

The former PM, who formed the new party in 2020 after leaving the centre-right Liberals, has said he wants Denmark to be governed from the centre and has not committed to joining either the ‘red bloc’ or ‘blue bloc’ party factions, instead characterising his party as ‘purple’.

But commentators have speculated he could use Moderate seats as leverage for increased influence in a blue bloc government he would be instrumental in installing.

The new Voxmeter poll places the Moderates as the third largest party in parliament, behind only the two traditional bloc leaders the Social Democrats and the Liberals (Venstre).

Meanwhile the far-right Danish People’s Party (DF) – which took a 21 percent vote share two elections ago in 2015 – is now at 1.8 percent in the polls. That would send the party out of parliament altogether because a 2 percent threshold must be reached for a party to win any seats.

The poll comprises some statistical uncertainty, amounting to 1.8 percent for the Moderates and 0.8 percent for DF. It is based on polling of 1,008 persons between October 16th-18th.

This does not mean Frederiksen can expect a victory from this point. 90 seats are required for an overall majority.

Four seats are allocated to representatives from Greenland and the Faroe Islands and it is these, together with those from the Moderates, that could push either side over the decisive figure of 90.

The Conservative party falls to 7.7 percent or 14 seats in the new poll, its decline in support now leaving it behind the Moderates. The Denmark Democrats, a new party formed by former immigration minister Inger Støjberg, go from 4.9 to 3.9 percent.

Frederiksen’s Social Democrats are now polling at 25 percent, maintaining an approximately level vote share since the election was announced but 2.1 percent less than the preceding poll.