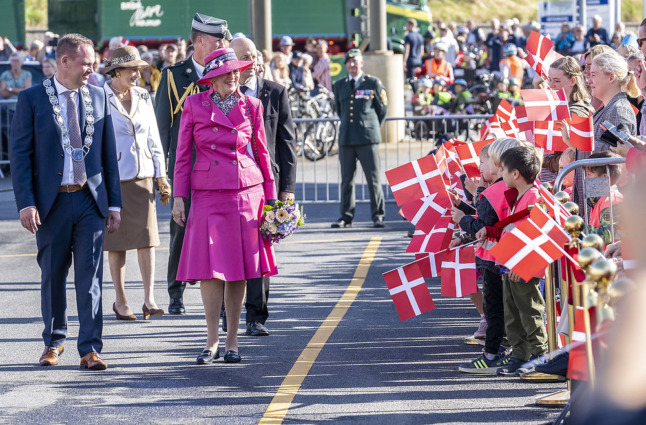 Queen Margrethe during a visit to Esbjerg on Tuesday. Photo: John Randeris/Ritzau Scanpix

The first day of September sees Denmark’s remaining coronavirus restrictions come to an end. This means the return of nightclubs after an 18-month absence, free reign for organisers of festivals and other large events, and a farewell to the corona passport in bars, restaurants, and fitness centres (although they will be needed at the newly-reopened nightclubs).

Meanwhile, health authorities will begin scaling down testing capacity, and financial support for businesses impacted by the pandemic comes to an end.

Later this month, Covid-19 in Denmark will be officially reclassified from a “critical threat to society” to an infectious disease which is “dangerous to public health”.

You can read more about the changes to coronavirus rules (and other changes to life in Denmark) in September here.

The Danish supreme court, Højesteret, will today decide whether to uphold an earlier decision by a lower court to ban the Loyal to Familia (LTF) gang, making the organised crime group illegal.

The final ruling will come just under three years since Copenhagen Police initially applied a ban against the gang, which was linked to a series of shooting incidents in the capital in 2017.

Since then, both the city court in Copenhagen and the high court for the east of Denmark (Østre Landsret) ruled in favour of the ban on the basis that LTF is a violent organisation.

The case is considered to be precedent-setting, as earlier described by broadcaster DR, because it relates to the Danish constitution, which guarantees the right for people to gather in organised associations.

A ruling is expected by 12pm today.

The foreign ministry has decided extend its assistance to people trying to reach Denmark from Afghanistan.

Up to 1,000 persons have already been helped to get to Denmark, according to DR, with authorities aware of at least 88 more, including 41 Afghans, still in need of assistance.

People with connection to Denmark who may be threatened by the Taliban takeover can apply at Danish consulates or embassies in the region for temporary asylum under a special provision.

Those who were employed locally by Denmark in Afghanistan, including people who worked as interpreters, can apply for help under the extended provision, according to the foreign ministry.

The opt-in scheme enabling people in Denmark to receive the Johnson & Johnson or AstraZeneca vaccines against Covid-19 comes to an end today.

The scheme allowed a private company, Practio, to administer the two vaccines outside of the national vaccination programme. Vaccination under the scheme required approval following a medical consultation.

Denmark pulled the J&J and AstraZeneca vaccines from its national programme earlier this year due to concerns over very rare but serious side effects.