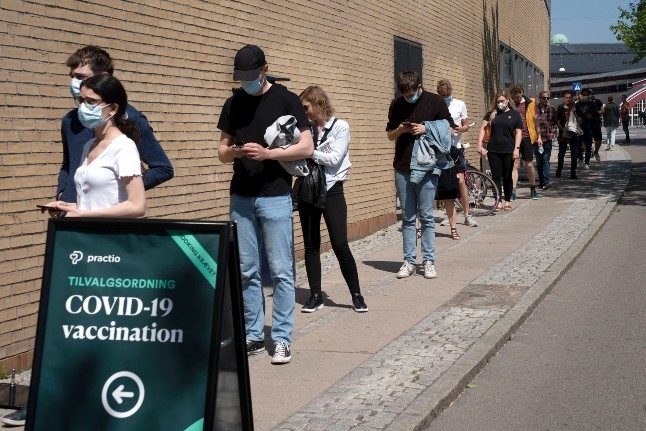 People in Denmark queue up to get the Johnson & Johnson jab under Denmark's voluntary scheme. Photo: Scanpix

The Johnson & Johnson vaccine was removed from the mainstream Danish vaccination scheme in early May due to concerns that a rare blood clotting condition might be associated with the jab.

But the Danish parliament voted to allow the private company Practio to run a voluntary vaccination programme in parallel with the national scheme, offering residents in Denmark a chance to receive the J&J or AstraZeneca vaccines ahead of the rest of their age group in the national scheme.

Over 46,000 people have received the J&J vaccine, according to the Danish infectious disease agency the Statens Serum Insitut.

But the opt-in scheme paid for by the government ends on August 31st, and on September 1st, the J&J vaccine will be shifted to private use, the Danish Ministry of Health said.

The terms of the deal with Practio have garnered substantial criticism over the past week – each dose of the J&J shot cost taxpayers about 5,000 kroner as compared to about 109 kroner for a dose of Pfizer or Moderna through the national scheme, reported Danish public broadcasting organization DR.

What vaccines can be used as boosters for J&J and AstraZeneca?

People who received the AstraZeneca vaccine have a clearer path to a booster shot – an SSI study found a combined vaccination programme that gave a dose of Pfizer or Moderna following an AstraZeneca jab was 88 percent effective at preventing infection.

On August 25th, Johnson & Johnson released data from a small study indicating that a second dose of their vaccine caused an antibody response nine times higher than that seen after the first shot. That data has yet to be published in a peer-reviewed scientific journal and has been submitted for review by the FDA.

Following a J&J shot with a different vaccine is also promising: according to the Centers for Disease Control and Prevention (CDC) in the United States, more than 90,000 recipients of the J&J vaccine have already received a follow-up vaccination. Some high-profile figures including Germany’s Angela Merkel have received “mix-and-max” vaccination courses, the New York Times reported in June. ‘

What do Danish health agencies (and Practio) say?

Jonas Nilsen, a medical doctor and co-founder of Practio, told the Local Denmark that he hasn’t had any discussions with the government about booster shots.

The Danish infectious disease agency the Statens Serum Institut referred questions on possible booster shots for people who received the J&J or AstraZeneca vaccines to the Danish Health Authority (Sundhedsstyrelsen), which has administered the public vaccination program.

The Danish Health Authority added that there are currently no plans to offer booster shots to the general public, despite an announcement from the Danish health minister on August 23rd that everyone in Denmark will have a third dose of the vaccine.

Representatives from the Danish Health Ministry said they were preparing a comment for the Local Denmark as of August 30th. This article will be updated with their response when it is provided.