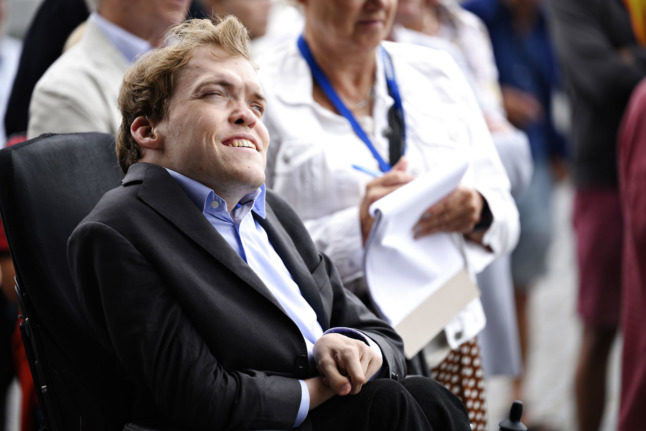 Kristian Hegaard has decided to leave politics after reports that he drunkenly groped a colleague. Photo: Philip Davali/Ritzau Scanpix
Denmark to end face masks on buses and trains on Saturday
Denmark is scrapping the requirement to wear face masks when standing on buses, trains and the underground two weeks early, the Ministry of Transport announced on Friday.

The requirement was scheduled to be lifted on September 1st, but is bring brought forward as a consequence of the Danish Health Authority’s decision to lift the recommendation to keep one-metre’s distance in public spaces.

“We have had the requirement for a face mask when entering and leaving public transport, because it can be difficult to keep your distance. But when the distance requirement is no longer there, we have chosen to abolish it now,” said Benny Engelbrecht, Denmark’s transport minister, in a statement.

The requirement still applies at airports and on planes, as that is subject to an international agreement. Read our story here.

The idea that the coronavirus pandemic originated accidentally via Chinese laboratory workers has surfaced again,
this time in a documentary aired by Danish TV on Thursday.

China has reacted furiously to any suggestions that the pandemic, which has killed at least 4.3 million people since emerging in the city of Wuhan in December 2019, was caused by malpractice involving one of its laboratories.

But this is part of the “probable” assumptions, according to the head of the World Health Organization mission to investigate the origins of the pandemic.

“An employee (of a laboratory) infected in the field taking samples falls under one of the likely hypotheses. This is where the virus passes directly from bats to humans,” Peter Embarek told the Danish public channel TV2

The first phase of the WHO study, conducted at the start of the year, concluded on March 29 that the hypothesis of a laboratory incident remained “extremely unlikely”.

However, Embarek said it had been difficult for his team to discuss this theory with Chinese scientists. Read our story here.

Denmark’s former defence chief and several veterans of the country’s campaign in Afghanistan have come forward to criticise the deal to evacuate and give temporary refuge to Afghans who have worked for Danish armed forces and its embassy.

The deal only covers those who have worked for Denmark in the last two years, and is expected to cover just 200 Afghans.

“This is a total betrayal to those who walked side by side with us, in Danish uniforms with the Dannebrog on their shoulder. You are doing nothing for them,” Mads Silberg, an army officer who was deployed in the country, told state broadcaster DR.  “The new deal is utterly pathetic, amoral and disrespectful.”

He said the claim that those who had served with Danish forces prior to 2019 could apply under a 2013 deal over Afghan translators was misleading.

“Politicians say that you do not leave anyone in the lurch. But the old deal is constructed as a bureaucratic death machine,” he said. “The interpreters need to prove, themselves, that they are threatened with death. But it’s too late if the Taliban knocks on the door at night.”

Kristian Hegaard, legal spokesman for the Danish Social Liberal Party, has announced that he is leaving politics for good after drunkenly touching a party colleague.

“I have just been given the information that at a festive occasion in the city recently in a very drunken condition, which I unfortunately do not remember anything about, I have committed boundary-crossing behavior,” he wrote in a statement on Facebook.

“It’s not something I myself remember, but I take it very seriously, and I’m really sorry to have behaved in a boundary-crossing way.”

He said that the event had happened several months after he had been informed by party leader Sofie Carsten Nielsen of a previous incident.
Hegaard, who is a disabled wheelchair-user, said he had been drinking and partying since he was 18. “It has been a way for me to show that you can do the same things others do even if you have a disability,” he wrote.
Denmark stops forced repatriation of Afghan asylum seekers

Denmark immigration ministry has announced that it is temporary suspending the repatriation of Afghan asylum seekers due to the deteriorating security situation in the country. There are currently 45 rejected asylum seekers waiting to be deported to the country.

“Until now, Denmark has had satisfactory deportation cooperation with Afghanistan, both in terms of forced and voluntary repatriations,” the ministry said in a press release. “It is not a collaboration that the government wants to endanger.”

The Afghan authorities have informed the ministry that Afghan asylum seekers who wish to return to Afghanistan voluntarily can continue to do so.