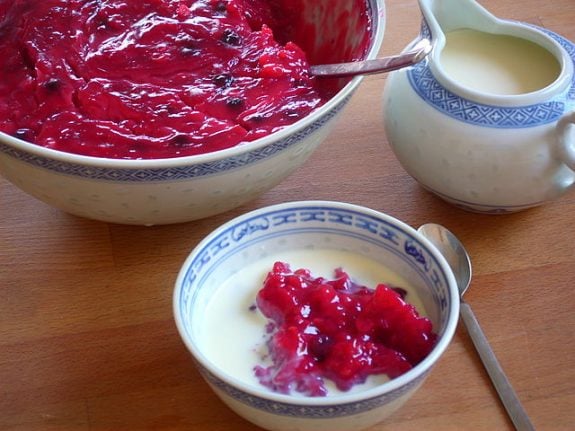 Yeah, it's so hilarious to say rødgrød med fløde. Photo: Olaf Simmons/WikiCommons
Despite its many challenges – including getting a Dane to actually speak it to me – I’ve come to appreciate the Danish language and have even used this space to advocate the universal adoption of ten Danish words that I find particularly efficient and useful.
But there is no doubt that I’ve yet to master it (here are some signs that you never will) and there are still a lot of Danish words that, for one reason or another, drive me batty.
With that in mind, here are my picks for the absolute worst words in the Danish language.
Hygge
What it means: Some say it can’t be translated, but it basically means ’cosy’ and when used as an adjective (i.e. saying ‘Det var hyggeligt’ at the end of an evening with friends), it’s often simply a stand-in for ‘fun’ (That was fun).
Why I hate it: Hygge has to be the most overused and overhyped word in the entire Danish language. But in fairness, you can’t solely blame the Danes. Hygge is in the process of being co-opted by the Brits and Americans, as evidenced by its inclusion in Oxford Dictionaries’ words of the year list. Isn't it just so hyggeligt? Photo: Iris
Selvfølgelig
What it means: Obviously or of course
Why I hate it: Because I can’t spell it. Ever. Sometimes I’m so far off, spell-check can’t even recognize my attempt. Seriously, every time I need to write it (and it’s a fairly common word), it’s a bit like this: self, selvfol, selfogel, selvfølgelig.
Syvoghalvfjerds
What it means: 77
Why I hate it: First of all, I could have just as easily selected any two-digit number here. The Danish number system is completely illogical, as it is 20-based rather than 10-based and the second digit is said before the first. But 77 is a particular bane of my existence as it is my birth year and thus part of my CPR number. At least half of the time I give the number over the phone, the Dane on the other end thinks I have said tooghalvfjerds, or 72. I have no way to explain how speaking Danish somehow leaves me unable to clearly pronounce an s sound in a way that Danes can distinguish it from a hard t sound.
Rugbrød
What it means: Dark rye bread
Why I hate it: The reason here is two-fold. For one, it’s simply a difficult word to say properly. But secondly, Danes are utterly obsessed with it. They worship at the alter of rugbrød and will go on and on about its health benefits and its marvelous ability to sate one’s hunger. If you don’t like rugbrød – or if you don’t know all of the rules about which toppings to put on it and in which order – you are immediately stamped as ‘the other’. As I've written about before, Danes can be strangely intolerant over this. Photo: redstardk/Iris
Rødgrød med fløde
What it means: Red groats with cream
Why I hate it: Because no matter how long you’ve lived in Denmark, someone will think it’s cute to ask you to pronounce the name of this dessert dish. Believe me, it quickly stops being funny. I like to respond by asking Danes to say “she sells seashells by the seashore” or to pronounce the main villain of the classic Star Wars films, which they will almost certainly say was “Darth Waaader”.
Fuck
What it means: Fuck
Why I hate it: Because Danes of all ages completely overuse it and don’t realize that it is offensive. Look, I’ve been known to cuss like a sailor but I still bristle when I hear a small child say ‘fuck’ and I can't get over the fact that it is used in newspaper headlines and even in the title of TV programmes aimed at kids. Small children and the word 'fuck' don't go together in my book, but it was a winning combination for my local newspaper.
Tredjegenerationsindvandrere
What it means: Third-generation immigrant.
Why I hate it: The fact that Danes think they need a special term to describe someone who was not only born and raised in Denmark, but whose PARENTS were born and raised in Denmark pretty much tells you everything you need to know about the nation’s never-ending and exclusionary immigration debate.
Udlændingestyrelsen
What it means: Danish Immigration Service
Why I hate it: Hmm, where to start? The constantly changing rules? The interminable waiting times? The absolute dread I feel every time I receive correspondence from them? Let’s just say that if you’ve dealt with Udlændingestrylsen, you’ll understand why it’s on the list.
For more fun with the wacky Danish language, be sure to check out the following:
13 signs that you'll never master Danish

Not even the Danes can understand Danish
VIDEO: Origins of Danish language revealed
Americans get tongue tied speaking Danish
Ten Danish words the world should start using
Test your Danish skills with our word quiz
Ten false friends in the Danish language