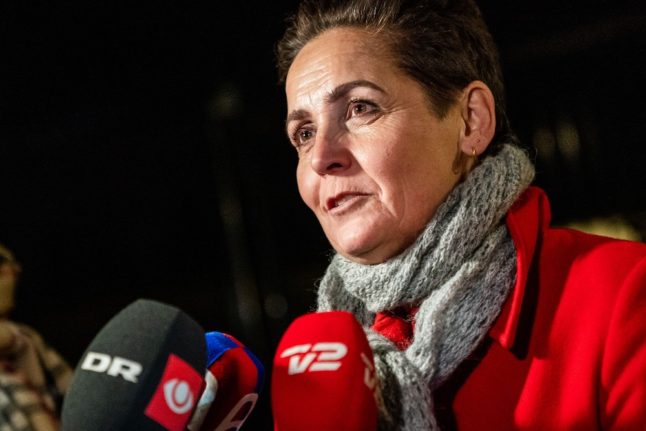 SF leader Pia Olsen Dyhr confirmed her party will not continue in talks to form the next government in Denmark. Photo: Ida Marie Odgaard/Ritzau Scanpix

SF leader Pia Olsen Dyhr confirmed to newspaper Politiken that her party was out of talks to form Denmark’s next government, which have been ongoing since the election on November 1st.

Dyhr said talks had “become too blue”, meaning conservative, in an apparent reference to the likely coming together of the Social Democrats and their erstwhile rivals on the right, the Liberal (Venstre) party, in a government agreement.

Although its name invokes socialism, SF is better described as a social democratic party ideologically and was the party closest aligned with the Social Democrats, which governed Denmark in the previous election period from 2019 until November’s election.

SF and other left-wing parties propped up incumbent prime minister Mette Frederiksen’s minority government during the period, but Frederiksen now wants to work with parties to the right of the Social Democrats and across the political centre.

“These have been constructive negotiations but we are too far from each other on crucial points. This is the case when it comes to climate and nature,” Dyhr said.

“The Liberals are pulling in a different direction because they are close to the agricultural sector. And things are too blue when it comes to the underprivileged,” she said.

“These are some of the things we have fought for at the negotiation table and we have really not seen much movement in relation to [helping] the poorest families,” she said.

Some 11 elected parties have taken part in the talks with Frederiksen, who was nominated as the “royal investigator” or kongelig undersøger to lead negotiations to form government after the Social Democrats won the largest vote share at the election.

Although the two former parties have not technically left the negotiations, they have not recently been summoned for new talks.

READ ALSO: How close is Denmark to getting a new government?