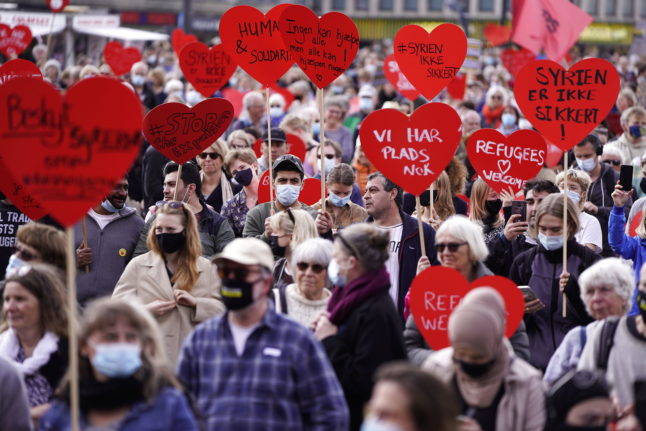 Broadcaster DR reports that 20-year-old Syrian Mariam Karim, who has been in Denmark since she was 13 and now works part time at a care home while also studying to be a social carer – and is also pregnant – has been told she must return to Syria under Danish immigration rules.

Male members of Karim’s family, including her husband, are not being deported because they risk being drafted into the military. Her parents and siblings can stay because her siblings are minors. The family has legally resided in Denmark since 2015.

“I am scared. I don’t want to leave my family,” Karim told the broadcaster, adding that she still retains hope that the decision can be changed.

“I don’t think it’s fair. I’m safe here and I’m doing everything I should to be part of Danish society,” she also said.

Her case is not unique, according to DR, which writes that it is aware of nine different cases involving young women in their early twenties who were both working and enrolled in education at the time their residence permits were revoked.

The women are the only ones in their family to be deported and in some cases have been moved to the Kærshovedgård expulsion or departure facility which accommodates rejected asylum seekers, including some with criminal records.

The government justifies its decisions to repatriate Syrian refugees in some cases on the basis that the situation in the Damascus area is stable enough to return to if the individual is not at risk of personal persecution.

Its reports and reasoning have been criticised by human rights organisations and experts and the Nordic country has also faced criticism in the European Parliament over its stance.

Once Syrian refugees are placed in departure centres, they face indefinite stays there because Denmark has no repatriation agreement with the regime in Damascus and therefore cannot enforce deportation. This means rejected Syrian asylum seekers must leave Denmark voluntarily.

READ ALSO: ‘My mother risks going to jail’: Why is Denmark sending refugees back to Syria?

According to figures provided by immigration authorities to DR, 38 Syrians are currently awaiting deportation from Denmark. Most of them are living at deportation centres. Of the 38 refugees, 22 have had their residence permits withdrawn and do not have criminal records.

Denmark is obliged to comply with the UN refugee convention in its treatment of asylum seekers.

“It’s completely correct that, according to the refugee convention, you should go home when conditions in your country have fundamental and long-term stability,” chairperson Haifa Awad of Danish humanitarian NGO Mellemfolkeligt Samvirke told DR.

“But that’s just not how it is in Syria. We are more or less the only country that thinks Syria is safe. We are punishing a lot of young women and putting them in a deportation centre,” she said.

Conservative party leader Søren Pape Poulsen – a supporter of strict immigration rules – is among politicians to have criticised the situation.

“We need strict immigration rules in Denmark but it mustn’t get silly. And none of this makes sense because she is studying and is otherwise doing all the right things, and now she is going to be sent away,” he said to DR.

“It’s a fundamentally sensible idea that you should be here for as long as there is basis for it. That’s why we must have tight and fair immigration rules. But it should also be sensible. It shouldn’t be stupid. And this is stupid,” Rasmussen, now leader of the Moderate party, told DR.

“I understand that these individual cases can be emotional and that you can have a lot of sympathy for foreigners who want to live in Denmark. But this is the core of Danish immigration rules: if you are here as a refugee, you are here temporarily. And that applies regardless of whether you are unemployed, working, studying or retired, because everyone is equal before the law,” he said.

Karim told DR she has had two applications to extend her residence permit rejected, but has had her case reopened by the Refugee Appeals Board (Flygtningenævnet) following assistance from the Danish Refugee Council. She has also applied to be granted family reunification with her husband.

“I feel I am more Danish than Syrian,” she said.

Several instances were last year reported in which young Syrian women were told their residence would not be extended because it was considered safe for them to return to the Damascus area.

The women were working in Denmark or enrolled on education programmes – sometimes in the social care sector, in which the country is experiencing a staff shortage – at the time they were told they had to leave.

But a new approach will be taken in cases related to extending asylum status for women who “want to be part of Denmark”, broadcaster DR reports on Wednesday.

In autumn 2022, DR reported that it was aware of nine different cases involving young women in their early twenties who were both working and enrolled in education at the time their residence permits were revoked.

Some of the reported cases have described male members of families not being deported because they risk being drafted into the military. This has in some cases resulted in families being separated.

When the coalition government was formed in December, it stated in its policy agreement that it would “address the problem we have recently seen where young women from Syria have lost their residence permit despite having shown they want to be part of Denmark”.

“The government will therefore give continued residence for certain foreigners who are educated in areas where there is a labour shortage,” it added.

In written comments provided to DR on Wednesday, the Minister for Immigration and Integration, Kaare Dybvad Bek, confirmed the shift in course but said the government maintains its stance that all refugees must eventually return home once conditions allow.

This policy was established by the previous, single-party Social Democratic government. Bek was also immigration minister in the previous government.

“The government maintains that a stay in Denmark as a refugee is temporary. In recent times we have seen examples of foreigners losing their residence status despite them being engaged in education programmes in areas in which Denmark currently needs labour, for example in the health sector,” he said in the statement to DR.

“I don’t think that is appropriate. The government will therefore give the right to continued residence for foreigners who have, in this way, shown that they want to be part of Denmark,” he said.

The minister was unavailable for interview by DR on the issue.

Some Syrian refugees saw their status in Denmark revoked under the previous government because authorities concluded that the situation in the Damascus area is stable enough to return to if the individual is not at risk of personal persecution.

The reports and reasoning used to conclude it was safe for Syrians to return have been criticised by human rights organisations and experts and Denmark has also faced criticism in the European Parliament over its stance.