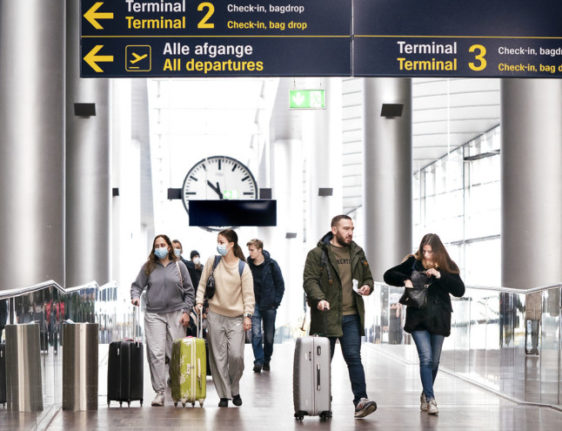 Passengers with baggage at Copenhagen Airport on February 14th 2022. Airline customers who face delays due to ongoing strikes by baggage handlers may be entitled to compensation, according to a consumer interest group. Photo: Liselotte Sabroe/Ritzau Scanpix

Baggage staff at Copenhagen Airport have been engaged in a wildcat strike – meaning a strike that is not endorsed by the workers’ trade union and in breach of their collective bargaining agreement – since Saturday morning.

Those strikes continued on Monday despite the Danish labour court, Arbejdsretten, ordering the baggage handlers to resume working and ruling fines can be issued to workers who continue the walkout, broadcaster DR reported.

Dissatisfaction with wage and working conditions has been reported to be the reason for the wildcat strikes.

The Danish Consumer Council (Forbrugerrådet Tænk) said on Monday that some airline customers may be able to claim compensation for the impact on travel caused by the strikes.

“When a flight has been delayed by more than three to four hours – depending on the length of the journey – you have the right to have your flight rearranged and if you are not happy with the rearranged flight, you can get your money back,” the organisation’s senior consultant Vagn Jelsøe told Ritzau.

“Additionally, in some cases you may have the right to further compensation to an amount corresponding to the length of the journey. That can be between 250 and 600 euros,” he said.

However, the European compensation rules have some exceptions, including for delays that occurs due to “unusual circumstances” which can include strikes.

But that does not necessarily mean SAS, which owns the baggage handling company, SAS Ground Handling (SGH), will be exempt from paying compensation in the current situation.

“There are actually different court decisions relating to strikes that point in different directions,” Jelsøe said.

“How a court would end up ruling in this case, I dare not say,” he said.

The consumer rights consultant said that passengers interested in claiming compensation should begin by contacting SAS. If a claim with SAS is rejected, they can contact the Danish Civil Aviation and Railway Authority (Trafikstyrelsen).

The unsanctioned strikes could also mean luggage does not arrive on time in addition to delayed flight departures.

“If you do not have your baggage forwarded to you within a reasonable amount of time, you also have the right to claim reasonable compensation,” Jelsøe said.

According to SAS’ website, passengers whose baggage is delayed by more than 24 hours can claim compensation of around 560 kroner per day to purchase essential items.

The baggage handlers are employed by the SAS Ground Handling (SGH) company, which manages baggage for several airlines and not only SAS.

Other airlines which use the company at Copenhagen Airport include Aegean, Air France, KLM and Lufthansa.