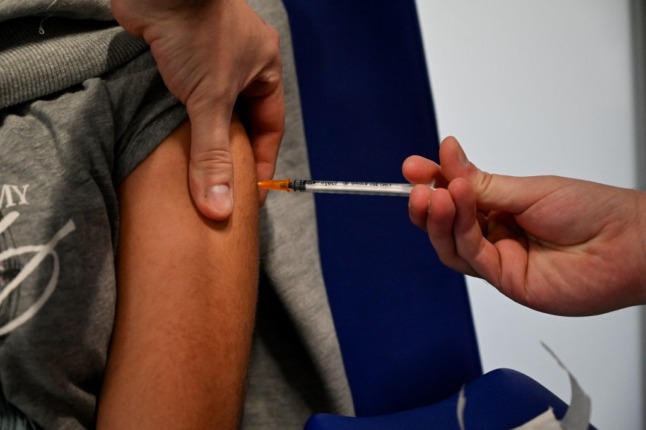 Denmark was one of the first European countries to open vaccination to all over-fives on November 26th. GEOFFROY VAN DER HASSELT / AFP

“I’m not scared, I’ve already done it 100 times,” he says, while around him nurses reassure children who have come to be inoculated against the coronavirus.

Inside a converted commercial warehouse in Taastrup, one young patient struts around the waiting room confidently, while another clutches a comforter, looking anxious.

Denmark was one of the first European countries to open vaccination to all over-fives on November 26th, though it is not compulsory.

Twenty percent of children born between 2010 and 2016 have already received a first dose in the Scandinavian country of 5.8 million inhabitants.

Samuel Christiansen, 8, says he has come to boost his immune system after a first bout of Covid-19, especially now the Omicron strain is spreading.

“I don’t really want to be sick” again with Omicron, he says.

His father, Henrik Jansen, says the family is there to “protect the elderly, the older members of the family, Granny and Grandad”.

Austria has also started offering jabs to its under-fives, while Portugal started on Saturday, and France is to begin next week.

In the fifth wave of the virus, “the most important tool is still vaccines, even in the fight against Omicron,” she said.

The Scandinavian country has said it will close cinemas, theatres and concert halls and restrict restaurant opening hours from Sunday over a record number of daily Covid-19 cases in recent days.

Fayrouz Ben Alaya said she did not hesitate to vaccinate her eight-year-old daughter, Camelia Fourati.

“I didn’t do it for her, but to lay down one more stone to stem the spread of the virus,” said the worker in the pharmaceutical sector.

Camelia was more than happy to get the jab.

“Everybody is the family was vaccinated, I was the last one,” she said.

“I’m happy I did it because now, if I get corona, I won’t feel anything.”