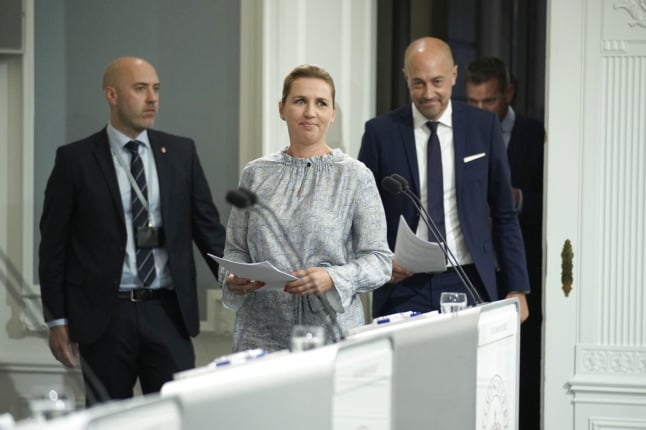 “The expectation in Denmark is that we will all have a third dose of the vaccine,” he said. “The question is when.”

The Danish Health Authority said last week that it would publish guidelines this week on who in the country will be eligible for booster doses and when they can be expected to receive them, with the agency’s deputy director saying that the first in line would be people with health conditions that weaken their immune systems.

Frederiksen began the conference by crediting the vaccines, which she called “the super-weapon to beat them all”, for the fact that she did not expect to have to order another lockdown to control the pandemic.

“Everyday life is fortunately back in most places, and we have the clear expectation that we can avoid major lockdowns in the future, because we have the super-weapon in place: the vaccines,” she said.

Danes, she said, had world-leading levels of vaccine acceptance, but she warned that, even so, too many of those under the age of 40 had yet to get their jabs.

“In Denmark, it is voluntary whether you roll up your sleeve and get a jab in your shoulder,” she said. “But I’d like to say very clearly to those of you that have yet to get vaccinated: you risk getting infected, and you risking passing those symptoms on to others.”

Even young people risked suffering debilitating symptoms long after being infected, she said.

Heunicke backed up Frederiksen’s call by warning of “an epidemic of the non-vaccinated”, with 80 percent of those currently being treated in hospital unvaccinated.

He also confirmed that Denmark planned to invest 800m kroner into the vaccine being developed by the Danish pharma company Bavarian Nordic, revealing that the country expected to get at least half of its investment back in the form of vaccine doses if, as expected, the vaccine is approved by the European Medicines Agency at the start of next year.

Søren Brostrøm, director of the Danish Health Agency said that he expected to see rising infection levels among the non-vaccinated over the rest of this year, and said he and the health ministry were now targeting having 90 percent of the population vaccinated by October.

He compared the vaccination program to a dam, which must be “built higher” and “in which the holes must be patched”.

There are still 1.4 million people in Denmark who have neither been fully vaccinated nor booked times for a dose, either because they are under 12 years of age, because they do not want to get vaccinated, or because they have not got around to booking a time.

The number of daily doses being administered has fallen from above 50,000 a day at the peak in mid-June to below 5,000 today.

At the press conference, the government announced that before October 1st, it intended to offer vaccinations at all sites of youth or adult education across the country, as well as pop-up vaccination centres in residential areas and workplaces with low levels of vaccination take-up.

All vaccination centres will be required to offer jabs to those who arrive without prior appointments.

The government will also step up its targeted advertising campaigns, and do further research into why some groups are still not getting vaccinated.

Brostrøm said that the authorities had also considered offering vaccination at primary schools.