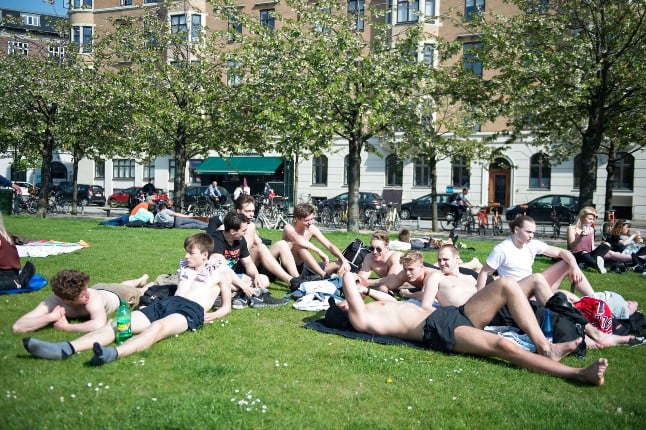 What are the Copenhagen police doing?

Copenhagen Police, together with Copenhagen Municipality, have launched a new campaign, Alle skal kunne være her, meaning “Everyone should be able to be here“, to limit late night noise in the city throughout the summer.

The municipality has also announced new rules for several popular outdoor gathering spots, and is currently working on a plan to address these problems long-term.

How big a problem is noise pollution from people with portable speakers?

According to the municipality, late night noise has increased in recent years, especially in 2020.

“The problem was particularly felt last year due to the Covid shutdown of the usual nightlife locations, which resulted in the party moving into parks and recreational areas,” said Søren Geert Nielsen, head of Copenhagen Municipality’s noise division.

“We do not want to prevent people from having a good time in the city, but we do have an obligation to make sure that due consideration is paid to noise-plagued neighbours.”

The police logged roughly 200 complaints in the first week of June 2021 alone.

Although Covid-19 restrictions have continued to be relaxed, the last remaining restrictions aren’t expected to end until October 2021, so the city may be in for a similarly loud summer.

What is the campaign doing?

In an effort to encourage outdoor party-goers to be more considerate of other residents, the new campaign is placing posters and other signs at popular outdoor gathering spots. It is also launching a campaign on social media.

From June 28th to July 4th, the Copenhagen Police and volunteers from the Natteravnene (literally, “The Night Ravens”, a neighbourhood organisation) will engage in dialogue with party-goers in the streets.

Copenhageners are also being asked to come and pick up their own campaign posters at Kihoskh, a popular Copenhagen alcohol shop, at Sønder Boulevard 53, to support the message.

What else does Copenhagen police think is behind the problem?

Peter Dahl, chief superintendent at the Copenhagen Police, said Covid-19 restrictions are just one of many factors that increase outdoor gatherings, adding that warm weather is also a primary factor.

According to data from Copenhagen Municipality, noise complaints related to restaurants and bars have increased 60 percent from 2015 to 2019. Complaints peaked in 2018, a particularly warm summer, with a total of 4,547 registered complaints.

Copenhagen Mayor Lars Weiss said he understood why people were eager to spend time with friends following the Covid-19 lockdowns, but said that this had to be balanced with consideration for other residents.

“I hope the campaign – together with a number of other initiatives – can help prevent the party in the street from taking over this summer,” he said.

What else are the authorities doing?

Other initiatives include more frequent supervision of bars and restaurants playing outdoor music and a ban on electronically amplified music in select locations around the city, such as Havneparken on Islands Brygge, Hørsholmparken in Nørrebro, and the part of the Fælledparken park that faces Serridslevsvej.

An experimental ban forbids electronically amplified music – defined as anything that has a battery or electrical connection, from mobile music to speakers – after 10pm on Fridays and Saturdays, and after 8pm from Sunday to Thursday, as well as on public holidays.

In addition to signs explaining the new rules in each of those areas, police officers will be visibly present at popular late night party spots, Police Director Anne Tønnes said.

Dahl said that the Copenhagen Police have a dialogue-based approach to policing and will most often issue a warning before issuing a fine for playing amplified music in public.

“In the new zones,” he added, “we have the opportunity of issuing charges without warning. If our order to turn off amplified music is not followed, then we can impound the music player.”

Night hosts (natteværter), easily visible in their blue jackets, will also increase their presence throughout the summer. This initiative to promote safety and reduce nuisances related to nightlife was launched in March 2019 and has played a role in promoting Covid-19 safety regulations around the city since March 2020.

Will there be legislation in future?

Future efforts to limit late night noise centre around the 2021 Restoration and Nightlife plan, which the municipality’s culture and leisure committee and its technical and environmental committee sent for public consultation at the end of May.

An earlier version of the plan, which called for a ban on alcohol sales from midnight to 5am, was shelved earlier this year, not only because of the impact such a ban would have on Copenhageners, but also on a nightlife industry which has suffered through more than a year of Covid-19 restrictions.

The latest version instead focuses on increasing the number of natteværter, cooperation with stakeholders within the nightlife industry, and identification of party zones so solutions can be found for specific streets, among other measures.

“It is important that Copenhagen continues to be a city where you can both party and live,” she said.