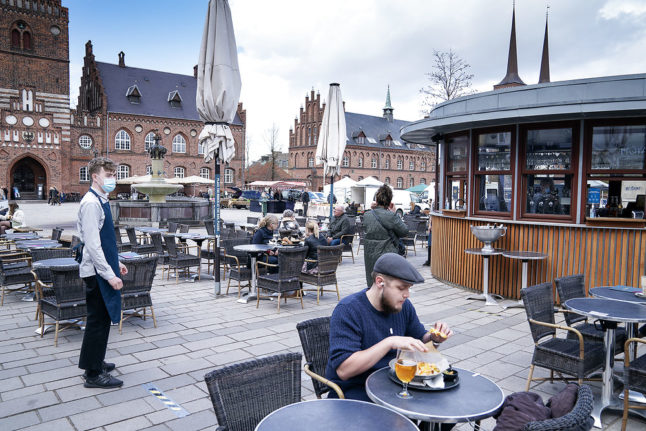 People at a cafe in Roskilde on Wednesday. The spires of the city's medieval cathedral can be seen in the distance. Photo: Claus Bech/Ritzau Scanpix

Reopening of bars and restaurants was ‘nice and easy’

After coronavirus restrictions were eased yesterday, police said that there were no issues with reopened bars, cafes and restaurants.

All police districts said they had not had any major incidents on the reopening day, news wire Ritzau reports.

Guests and establishments alike respected the remaining restrictions requiring them to stop serving at 10pm and to close completely by 11pm.

Customers are also required to show a corona passport if they are to sit inside, under the new rules.

“Spirits were high all the way and there were no problems whatsoever,” East Jutland Police officer Morten Bang told Ritzau.

Demonstrations against plan to repatriate Syrians

Around 1,000 people protested yesterday outside the parliament against the government’s decision to revoke residence permits for Syrian refugees citing a “safe” situation around Damascus.

“I’m here to show my support for the Syrian refugees. I think it’s irrational that we are the only country in the European Union to send back Syrian refugees to the Damascus area,” Anne, a 24-year-old student who would not disclose her last name, told news wire AFP.

More on that in this report.

Denmark’s judgement that Damascus and the surrounding area are safe for return is based heavily on reports produced under the auspices of the Danish Immigration Service.

As we described earlier this week, eight out of twelve expert sources used by the Danish government in its latest report of the security situation in Syria earlier went public to distance themselves from the conclusions of the final report.

A further three of those sources have since joined the others in rejecting it. The only remaining source not to have rejected the report is a general in dictator Bashar al-Assad’s military, media reported yesterday.

Although it appears increasingly difficult for the Danish government to defend the report and its decision to return the refugees, it has not changed its stance so far. We’ll have more details in an article today.

Gangsters could lose their Danish citizenship under a new change to the law proposed by the government.

Dual nationals who are convicted of serious crimes in connection with their association with a gang would lose their Danish passports if the proposal becomes law.

An agreement for changes to existing citizenship rules, announced earlier this week, requires parliament to look into the possibility of revoking citizenship entirely from Danish nationals who have committed crimes.

We’ll have further detail on the proposal in a report later today.