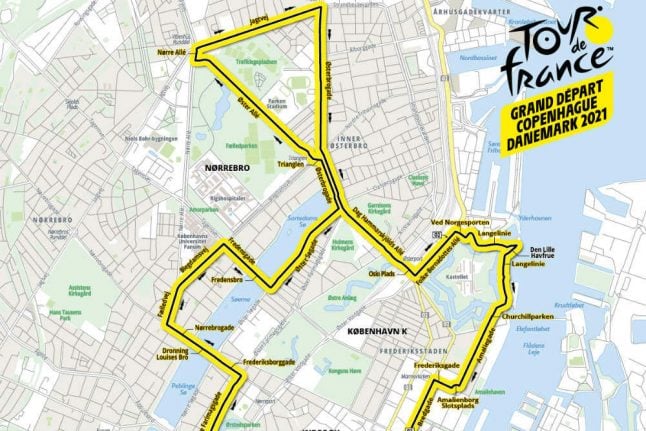 A detail from the Copenhagen stage. Map: Tour de France

The entire Danish route, which will take place on July 2nd, 3rd and 4th next year, was announced on Tuesday in a Ministry ofIndustry, Business and Financial Affairs press statement.

The opening stage, on July 2nd, will be a 13-kilometre time trial starting in central Copenhagen and taking in several of the city’s iconic locations including the Citadel, Queen Louise's Bridge and royal residence Amalienborg. The second Danish stage, July 3rd, is a 199-kilometre route from Roskilde to Nyborg, with three summit sprints in north-western Zealand and an intermediate sprint in Kalundborg, before crossing the Great Belt Bridge. The third stage, on July 4th, is 182-kilometre route through Jutland, from Vejle to Sønderborg with an intermediate sprint in Christiansfeld and summit sprints on Koldingvej, Hejlsminde Beach and Genner Beach. Grand Départ Copenhagen Denmark is the northernmost start in the history of the Tour de France.

“Today I am very pleased and proud that we can present three unique stages where the riders will pass some of the most beautiful areas in Copenhagen and Denmark. It's going to be a celebration for Danes everywhere in our streets and on the country roads – and at the same time, we get to show our beautiful cycling nation to the whole world,” Frank Jensen, the chairperson of Grand Départ Copenhagen Denmark 2021 and Lord Mayor of Copenhagen, said via the press release.

That Denmark would host parts of the 2021 Tour de France was originally confirmed last year, but the exact routes were not revealed until Tuesday’s announcement.

The event is set to garner a huge amount of public interest in cycling-mad Denmark.

“With as many as three stages at the start of the Tour de France next summer, we can show the world what Denmark is all about. This includes everything from the cobbled cities to the wavy yellow fields and tourist attractions that tell special stories about Denmark. The Grand Départ 2021 is going to be a great achievement and is also going to create great attention for both Danish businesses and Danish tourism,” business minister Simon Kollerup said.

Christian Prudhomme, general director of the Tour de France, described the Danish stages of the race as “exciting”.

“The first few days of the Tour de France often set the tone and atmosphere of a race that develops into whatever the riders want to make of it over the following three weeks,” Prudhomme said in the press release.

“It is an exciting prospect to think that in July 2021 we will be applying the final touches to the start in the heart of a city that breathes and lives cycling,” he added.