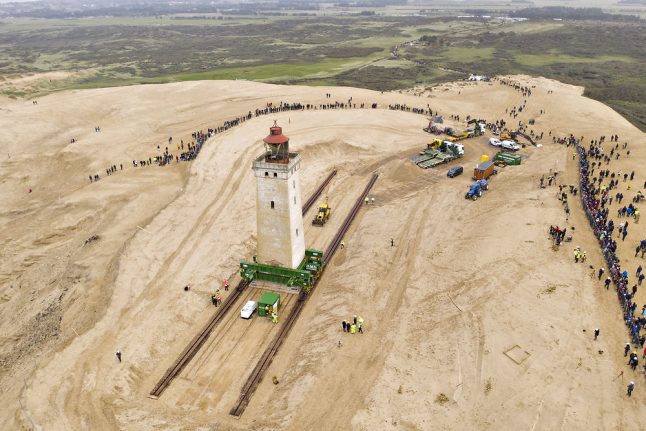 The task of moving the lighthouse, in order to protect it from sand and erosion, got off to a smooth start, project leader Thomas Lomholt told local media Nordjyske. The most critical phase of the relocation had been completed by 10am, Lomholt said.

Built in 1889 when the coast was 200 metres away, Rubjerg Knude Lighthouse is being moved a short distance from its home of 130 years due to fears it will eventually be destroyed by erosion.

Museum buildings located adjacent to the lighthouse were abandoned during the 1990s due to sand drift. To move the structure, a track was built by digging down and laying rails alongside its foundations. This morning, the lighthouse was lifted onto the rails and pushed inland along the two tracks. It will be moved at total of about 80 metres, with work expected to be completed on Tuesday evening.

The unusual operation was watched by around 100 media and 1,000 spectators as it commenced, with as many as 25,000 people expected to pass by during the day. “This is a big day for me, the city council, all of Hjørring Municipality and and for the Vendsyssel region. This is a huge tourist attraction for North Jutland. So many people come here every year,” Hjørring’s lord mayor Arne Boelt said.