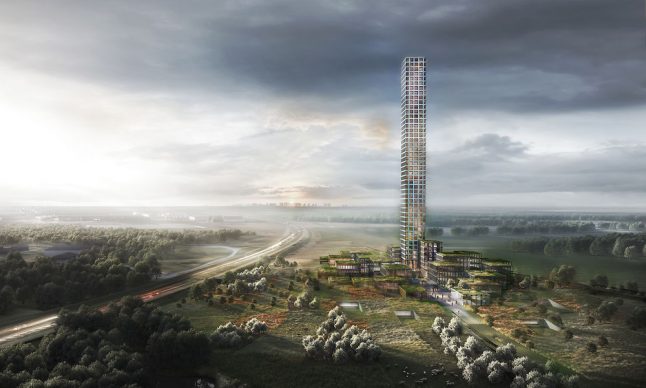 An illusration of the planned Bestseller development in Brande. Image: Bestseller / Ritzau Scanpix

The tower, which is to be built in the town where the company’s head office is located, was originally announced in 2017 and given planning permission by authorities in the Ikast-Brande municipality earlier this year.

Although an exact start date for construction had not been confirmed by the company, 2019 was originally given as the earliest year it could begin.

But the development will not proceed as soon as expected, Børsen reported earlier this week.

“The project is moving forward as before, but for the time being we will focus on primarily on internal concerns,” Bestseller project leader Anders Krogh told Børsen.

“That naturally requires fewer resources to be dedicated to specific development in this period,” he added.

Krogh had no other comment on the reason for the extended schedule for completion of the tower.

He stressed that the company is not considering scrapping the project.

Architecture firm Dorte Mandrup, a contractor on the project, has been forced to let go 7 of its 60 employees due to the delay, according to the report.

Bestseller was in March given the green light to begin construction of the tower, which would likely be an unusual sight, soaring above the Jutland landscape.

It will be Denmark’s tallest building by some distance, dwarfing the current highest, the 120-metre Herlev Hospital.

It would also be one of the highest buildings in Europe – Paris' Eiffel Tower comes in slightly shorter at 300 metres.