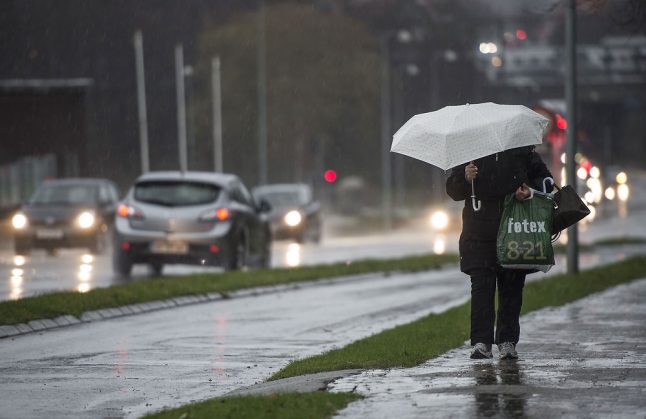 Some fog may also be present in parts of the country, according to Danish Meteorological Institute (DMI) forecasts.

“Monday will be cloudy across the country and maybe a little foggy. There will be localised fog banks on North Jutland and on Zealand,” DMI meteorologist Bolette Brødsgaard said.

“But (the temperature) will increase as the fog lifts, and then it will just be a grey day,” Brødsgaard said.

Heavy rainfall is forecast to move across the country from the west, beginning on Monday afternoon and reaching the east of the country by Monday night.

“Umbrellas and rain clothes should be at the ready this evening and tonight, and there will also be wind. A low-pressure zone over the Faroe Islands is moving down towards Denmark with wind and rain,” Brødsgaard said.

“(Monday) will be the kind of night where you should stay indoors if you want to keep dry,” she said.

Winds will be high, particularly on the west coast but not at the same levels seen during last week, when some areas experienced flooding, according to DMI.

The northerly wind may push waters in the Kattegat and Great Belt areas, which DMI is monitoring.

“We are keeping an eye on water levels and will respond if it appears necessary to issue warnings, but it is too early to say more at this stage,” the meteorologist said.

Wednesday and Thursday are both forecast to be cold, with temperatures just above freezing. Any precipitation on these days could take the form of snow or sleet.

“But Friday looks like being a rather nice day. The wind will make it feel cold, but it will be the warmest day this week with temperatures up to eight degrees (Celsius),” DMI’s forecaster said.