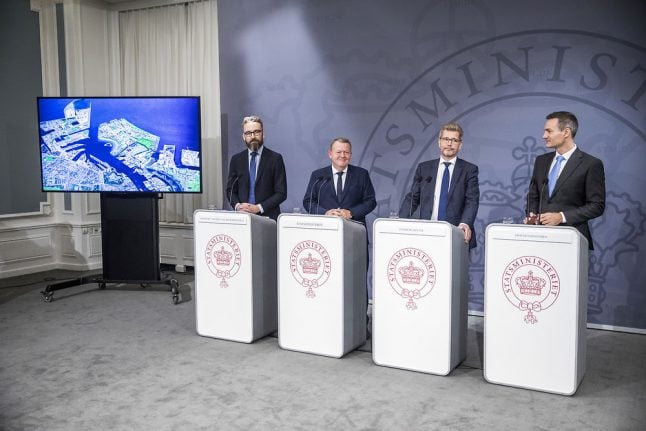 The spectacular centrepiece of the plan is the construction of an artificial island which would be built on the end of Refshaleøen, itself an extension at the northern point of Amager, an island district within the city.

“There will be an island able to accommodate 35,000 residents with the corresponding number of jobs,” Rasmussen said.

Up to 20,000 new homes are planned for construction in both Refshaleøen and the new district, which will be named Lynetteholmen.

The first new homes will be built by 2035, while Lynetteholmen itself will not be complete until 2070.

“This is a historic event, not just for Copenhagen but for all of Denmark,” business minister Rasmus Jarlov told broadcaster DR following the announcement.

Copenhagen lord mayor Jensen said the ambition was to build one in four of the new homes as affordable housing.

The island itself will be constructed using surplus material from other construction projects in the city, according to the plan.

Meanwhile, a new tunnel under the harbour and a ring road to the east of the city will be constructed as infrastructure is developed, while measures will also be taken to improve the environmental impact of the urban area.

A proposed new metro line connecting the new district with the rest of Copenhagen would be financed by the sale of land on the newly-reclaimed ground, Minister of Transport Ole Birk Olesen said.

“We are getting a free island and will be able to subsequently sell the land. It is this sale which will finance (the metro line),” Olesen said.

Funding will also be gleaned from the use of the various new transport links.

Rasmussen said that the overall cost of the project was estimated at 20 billion kroner (2.7 billion euros), but stressed that “this cannot be stated precisely”.

The project will not draw funding from taxes, according to the plan.

The government and Copenhagen Municipality have agreed in principle on the project, which must next receive the backing of a parliamentary majority and the support of the municipality’s citizens’ committee (Københavns Borgerrepræsentation), DR reports.

Neighbouring municipality Frederiksberg, a co-owner of the Metro, must also agree to the plan.

Should those approvals be secured, viability studies will be conducted into the construction of the Lynetteholmen island – a process which is expected to take two years. Similar preliminary studies into the ring road and Metro projects will also take place.

Construction of Lynetteholmen could begin in 2021 and continue well into the second half of this century, with estimated completion in 2070.