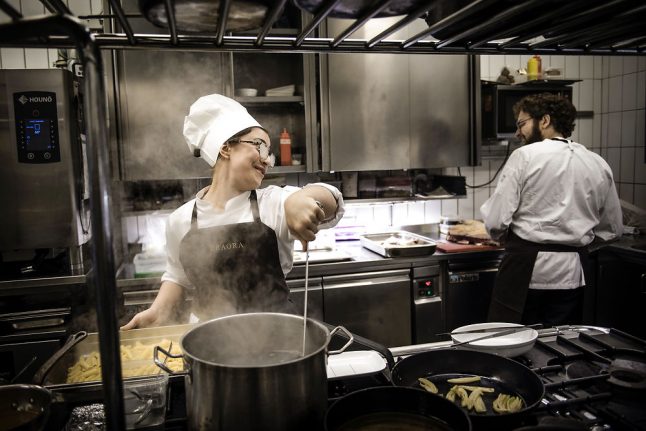 A file photo of the kitchen at Era Ora, a Michelin restaurant in Copenhagen. Photo: Thomas Lekfeldt/Ritzau Scanpix

The measure, which could have visitors to the Scandinavian country licking their lips, is part of the upcoming 2019 budget, Ritzau reports.

A total of 40 million kroner is set to be invested in the country’s fine dining industry, the Ministry of Environment and Food wrote in a press statement.

A number of initiatives will benefit from the investment over a four-year period, helping to consolidate Denmark’s place as a global leader for gastronomy, according to the press statement.

26 restaurants across the country currently have one or more Michelin stars. Copenhagen’s Geranium, the only three-star Michelin restaurant in Denmark, is number 19 on the prestigious World’s 50 Best restaurants list.

One of the initiatives funded by the government investment will be a new academy to train gourmet chefs.

Maintaining a place on the fine dining map is of long-term benefit for Denmark’s economy, Minister for the Environment and Food Jakob Ellemann-Jensen said.

“We have succeeded in building an identity as a country in the gastronomic super league,” Ellemann-Jensen said.

“Gastronomy can help provide jobs in Denmark through both tourism and agriculture. That would be a development that would benefit all Danes,” the minister added.

“Strengthening Danish gastronomy would also be something that would also very much strengthen Denmark as a tourist destination with regard to the ten percent of tourists for whom fine dining is a primary reason for selecting their holiday destination,” Jarlov said.

The investment will also focus in part on health, sustainable production and reducing food waste.