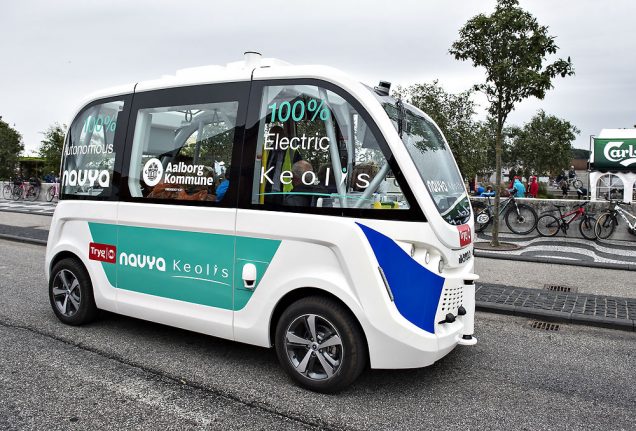 A file photo of the type of bus used in the trial. Photo: Henning Bagger/Ritzau Scanpix

Students at the Technical University of Denmark (DTU) could be the first to try the driverless buses, should an application made by operator Autonomous Mobility to the Danish Road Directorate be approved.

The company is the first and so far only applicant for a license to operate the self-driving vehicles in the Scandinavian country.

The small, white driverless buses have already been spotted during test runs at DTU’s campus in Lyngby, a district in the northern part of Greater Copenhagen, the area also covered by the Autonomous Mobility application.

Students, staff and guests at the university will be able to park their own vehicles some distance from the university’s main buildings and take the self-driving transport to complete their commutes, should the plan be implemented.

The entire distance covered by the driverless transport will be just under one kilometre.

“The facilities are here, we have roads that can be closed off and we have the ability to monitor all activity in the area. So in that sense [DTU] is a good place to try out the buses,” Nielsen said.

The project has received financial support from the EU and also includes a research element, the university chief confirmed.

Two buses with maximum speeds of 15-18 kilometres per hour will provide the trial service, which could begin later this year.

Operation of self-driving buses in Denmark requires a special permit from traffic regulators.

But the company hopes to get the green light before the end of this year.

A near-identical trial has already begun in Sweden, where Autonomous Mobility is using the same Navya self-driving buses to transport passengers around Chalmers University of Technology in Gothenburg.

READ ALSO: First driverless bus could be on road to Denmark