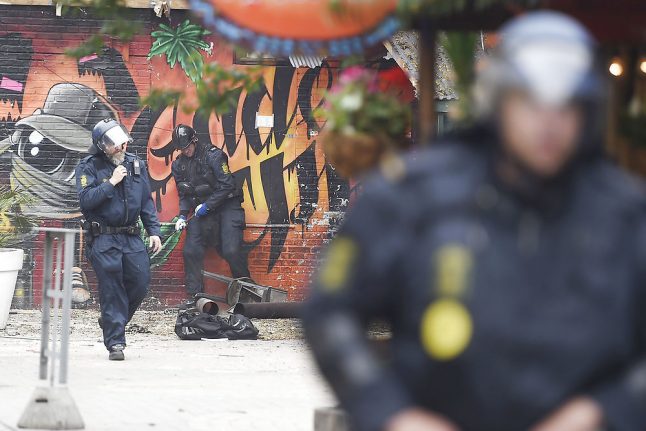 Ten kilograms of hash and various other cannabis products, 3,400 joints, doping substances, knives, pepper sprays and over 80,000 kroner (10,700 euros) in cash from sales of cannabis were confiscated in the operation, while 13 people were arrested, Copenhagen Police confirmed.

The police raid took place in the Pusher Street area of the Christiania district.

Seven of the arrested people will appear for preliminary procedures in court on Wednesday, while the remaining six will be released, said Copenhagen Police Deputy Chief Superintendent Lars-Ole Karlsen.

“The persons who will appear in court are to be charged with selling cannabis. All of the arrested persons are suspected of dealing or to have close connections to the cannabis trade at Pusher Street,” Karlsen said.

Police carry out regular raids in an effort to restrict the cannabis trade in Christiania, an alternative enclave originally established by hippie squatters in 1971.

Permanent cannabis stalls were torn down in 2016, but hash and marijuana are still sold along the Pusher Street thoroughfare.

Police entered Christiania on Tuesday afternoon as part of a routine operation against cannabis dealing in the area, reports Ritzau.

But officers were reportedly met by around 20 masked men, who attacked them by throwing stones and bottles.

“There was a really bad atmosphere in Christiania yesterday,” Karlsen said.

“We are concerned about their obvious readiness to resort to violence and their organised attack,” the deputy chief superintendent added.

“We strive to adapt our operations to the level of resistance we can expect to meet. It was 3pm [at the time of the operation, ed.], so we knew there would be a lot of cannabis dealers working,” he continued.

To officers were reported hit by thrown objects, but were not seriously injured.

The police operation lasted around 15 minutes in total.