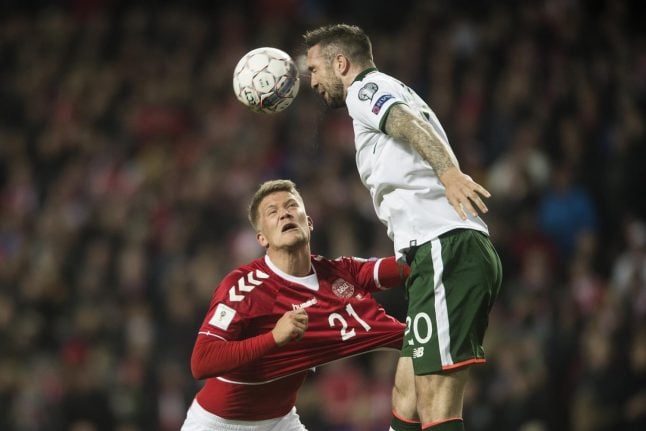 The closest either side came to a goal was when Pione Sisto fired wide in the first half for the hosts, while Yussuf Poulsen saw a 90th-minute header saved by Darren Randolph.

Much of Saturday night's game was characterised by Denmark’s long-ball tactics being comfortably dealt with by Ireland’s well-drilled and physical defence.

“When the Irish close ranks, it’s difficult to get the ball in between their lines and get players like Christian Eriksen and Sisto going. But that was also related to the tempo,” Denmark coach Åge Hareide told broadcaster DR.

“We made enough chances to win the game. We had at least three good chances, but we have to be able to get the ball between the posts,” he added.

Hareide left striker Nicklas Bendtner on the bench in favour of Feyenoord's Nicolai Jorgensen for the match at Copenhagen's Parken stadium.

The hosts started strongly and could have taken the lead in the 11th minute when Randolph saved Danish left-back Jens Larsen's volley, before quickly getting back to his feet to hold onto Andreas Cornelius' follow-up effort.

Sloppy defending from Ireland skipper Ciaran Clark gave the ball straight to Christian Eriksen and West Ham United keeper Randolph could only palm the midfielder's effort back into the middle, but Sisto fired the rebound wide with the goal gaping. Pione Sisto sent the best chance of the game wide in the first half with the goal at his mercy. Photo: Lars Poulsen/Polfoto/Ritzau

But the visitors grew into the game as the first half wore on and Cyrus Christie was denied by the onrushing Kasper Schmeichel after bursting into the area with an enterprising run from full-back.

Ireland continued to sit deep and frustrate Denmark, who finished second to Poland in Group E, after the break.

Hareide threw on former Arsenal man Bendtner with less than 20 minutes to go as the home crowd urged the red and whites on in search of a lead to take to Lansdowne Road.

The Danes had a late rally, with RB Leipzig forward Poulsen drawing a save from Randolph after climbing above the away defence to power a header towards goal, but Ireland held on.

Martin O'Neill's Irish now know victory in Dublin on Tuesday would secure a first World Cup appearance since 2002, but an away goal for the Danes could prove decisive after this clean sheet.

“A draw has always got to be seen as a positive result. Although we could have done with scoring an away goal,” Ireland midfielder Harry Arter told Sky Sports.