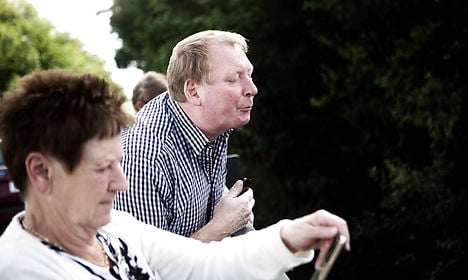 This image became a symbol of Denmark's sharply divided reaction to the refugee influx in September 2015. Photo: Sigrid Nygaard/Scanpix
Dubbed ‘the spitting man’ by the Danish press, the man was caught by an Information photographer spitting from a bridge onto a group of migrants walking along the motorway on the island of Lolland.
The man was charged with violating article 266b of Denmark’s penal code, best known as “the racism paragraph”. According to the indictment, the man also yelled derogatory terms at the migrants, and gave them the finger.
TV2 reported that rather than go to court, the man decided on Wednesday to pay a 5,000 kroner ($764) fee.
Police prosecutor Jeanette Wincentz Andersen said that she “didn’t know” if the man was admitting to racism by agreeing to pay the fine.
“If he denied his guilt, then it would have gone to court and then it would have been up to the judge to determine whether he should be convicted and pay a fine. Now he has accepted a fine so it must imply that he has admitted his guilt,” Andersen told TV2.
The spitting incident occurred on September 7th, 2015 when large groups of migrants attempted to walk from Denmark to Sweden. That large influx has also resulted in a number of human smuggling charges against Danes who offered the walking migrants a ride. Most recently, a well-known activist and her husband were both fined 22,500 kroner each for driving a Syrian family from Rødbyhavn to Copenhagen.
The woman shown next to the spitting man in the infamous photo has no personal connection to him and has strongly condemned his actions.