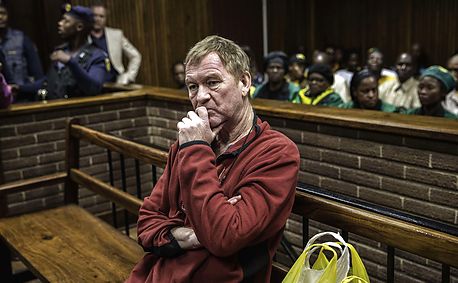 Frederiksen is due to testify on Thursday. Photo: GIANLUIGI GUERCIA/Scanpix
A Danish national accused of assault for mutilating several women and keeping their removed clitorises in his freezer appeared in a South African court on Wednesday to fight for bail.
Peter Frederiksen, a 63-year-old gun shop owner, was arrested in the central city of Bloemfontein in September after his wife told police that he assaulted her and mutilated her genitals.
When police searched Frederiksen's modest brick townhouse, they discovered upwards of 21 frozen pieces from at least seven female genitals, as well as pornographic photographs of children, investigators have said.
His diaries from 2004 recounting genital mutilation on women were also found, along with anaesthetic drugs, surgical equipment, and two pieces of dried female genitals hung on a hook.
Last month, South African police hailed a “preliminary breakthrough” in the investigation, saying that officials had identified some of his victims, which include a seven-year-old girl. Investigators also belive that some of the genitals may come from Danish women.
Frederiksen's wife, Anna Matseliso Molise, 28, was set to be the state's key witness before she was gunned down last month outside her house in Maseru, the capital of Lesotho, a two-hour drive from Bloemfontein.
See also: Key witness in Danish genitalia case murdered
Before her death, she told police she was drugged with laced champagne when she was mutilated.
Frederiksen, who has two children with Molise, sat alert in the dock at the Bloemfontein Magistrates' Court with his arms across his chest and his ankles bound by a chain.
Judge Marlene Marais ruled that, in terms of granting bail, Frederiksen's case came under the same category as murder and rape. Frederiksen's South African house, where police found genitalia stored in the freezer. Photo: Charl Devenish/AFP/Scanpix
Packed gallery
He faces a litany of charges, including three counts of assault, conspiracy to commit murder, possession, bigamy, and production and distribution of child pornography.
He also faces charges in connection with the illegal removal of human tissue.
Frederiksen, who has yet to enter a plea, declined to talk to the press, but his attorney Luthando Tshangana said: “We are confident that he still has the possibility of getting bail”.
The court's public gallery was packed with members of the African National Congress Women's League, the ruling ANC party's women's wing.
“We are here to make sure justice is served,” said Joyce Davids. “This is not a traditional practice, none of us went through this process.”
“If it was a cultural thing a black man would be doing it, not a man from Denmark… I hope he rots in jail,” she added.
Police have issued an appeal for Frederiksen's alleged victims to come forward.
The state has contended that he should be denied bail, arguing that he was in South Africa on fraudulent documents.
Frederiksen, who in the past pleaded guilty to illegally transporting elephant tusks, is expected to take the witness stand on Thursday to make his case for bail, a member of his legal team told AFP.
The small courtroom was patrolled by police carrying automatic rifles and wearing bullet-proof vests.
South Africa has legislation prohibiting female circumcision, although it is not a widespread practise in the country, according to Unicef.
No one has been arrested for the murder of Frederiksen's wife.