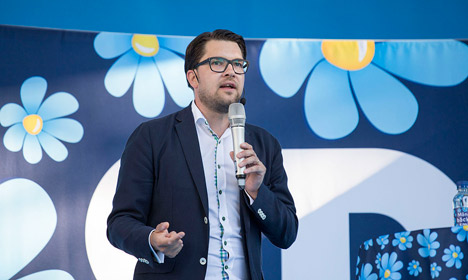 Sweden Democrats leader Jimmie Åkesson. Photo: Perzec/Flickr
Sweden’s anti-immigration Sweden Democrats has announced plans to place advertisements in foreign newspapers encouraging refugees to stay away.
“We want, through advertisements in foreign newspapers, to describe that the utopia they want to come to in Sweden no longer exists. Here, it's tent camps, winter and cold,” party leader Jimmie Åkesson said at a press conference.
See also: Denmark publishes anti-refugee ad campaign
Åkesson added that the party was inspired by Denmark’s recent campaign, which saw notices placed in four Lebanese newspapers. That campaign led to extensive international press coverage and prompted two separate counter messages from Danish groups.
One placed ads in The Guardian with the message “Dear refugees, we welcome you to Denmark” while the other ran altered versions of the government message with a postscript apologizing for the original campaign’s “hostility”.
See also: Danes publish refugee 'apology' ads in Lebanon
The Sweden Democrats said its campaign would be wider-reaching than the Danish government's and would even include advertisements in the Danish media.
“We're going to advertise in Turkey, Jordan, but also Denmark and Germany,” Paula Bieler, Sweden Democrat spokesperson on integration, told the press conference on Thursday.
Åkesson said that his party is taking action since the government won’t do anything to deter refugees.
“We're going to work outside parliament with massive campaigning and political signalling that the Swedish government does not want to do, but more like, for example, what Denmark has done,” he said.
The Sweden Democrats' announcement came as Swedish authorities prepared to set up 75 tents for refugees as the nation struggles to house a record number of asylum seekers.
The Swedish immigration service Migrationsverket said this week that 86,223 people have filed asylum applications so far this year. By comparison, the Danish Immigration Service (Udlændingestyrelsen) reports that 6,984 people have sought asylum in Denmark through August 31st and the Danish National Police (Rigspolitiet) estimates that an additional 3,500 have sought asylum since the start of September.
Swedes reacted to the planned campaign with their own lists of tongue-in-cheek reasons to avoid the Nordic country.