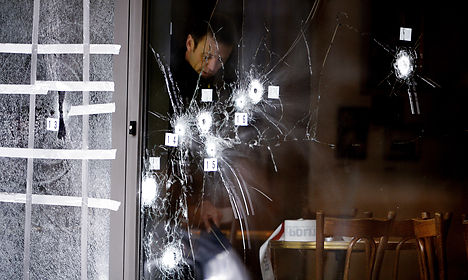 The two men are charged with helping the gunman get rid of the rifle used at the Krudttønden cultural centre. Photo: Liselotte Sabroe/Scanpix
Copenhagen Police said on Friday they had arrested a fifth man suspected of being an accomplice of gunman Omar El-Hussein who killed two people in deadly twin shootings last month.
The man was "suspected of complicity in the perpetrator's actions on February 14 and 15," police said in a statement.
"Like yesterday a number of raids are being carried out in connection with the arrest," it added.
A fourth man was arrested on Thursday in a downmarket area of Copenhagen, bordering the Nørrebro neighbourhood where El-Hussein lived.
Custody hearings held on Friday for the men, who cannot be named for legal reasons, were not open to the public.
The two, aged 25 and 30 respectively, faced preliminary charges of helping El-Hussein get rid of an M95 assault rifle he used outside a cultural centre hosting a debate on free speech and Islam, where he shot dead a filmmaker.
They were also charged with helping him get rid of clothing after the attack and for providing "other equipment" for the shooting that took place a few hours later outside a synagogue, where a Jewish man was killed.
The charges, which both men deny, did not specify what type of equipment they had given him before the second attack.
Both men had ties to Brothas, a criminal gang El-Hussein had been linked to and which is based on the housing estate where he grew up.
The 30-year-old reportedly wore a red hoodie when entering the court and threw a kiss at his girlfriend, who cried when the charges were read. The 25-year old wore a black hoodie.
Two other alleged accomplices have been detained since February 16 and a third since February 27 on suspicion of helping the 22-year-old gunman obtain and dispose of weapons.
Police on Tuesday searched another eight Copenhagen apartments as part of their investigation.