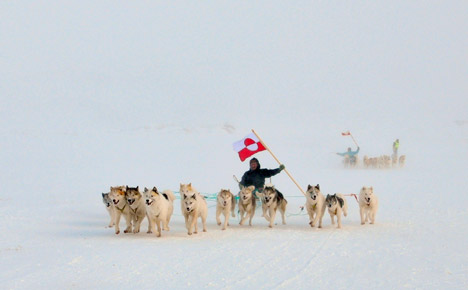 The study revealed that the Paleo-Eskimosare not related to the present-day Greenlandic Inuit. Photo: Colourbox
A long-gone group of ancient people known as Paleo-Eskimos lived in isolation in the North American Arctic for more than 4,000 years, said a study on Thursday.
They trekked from Siberia across the Bering Strait to their new home, and made no contact with other cultures who'd made the same journey at different times in history, including Native Americans and the Inuit people.
These Paleo-Eskimos eventually disappeared about 700 years ago, around the time when the ancestors of the modern-day Inuit moved eastward from Alaska, researchers said in the US journal Science.
"They were, in a sense, sitting ducks and either they were pushed out into the fringes of the Arctic area where they couldn't survive economically or else they may simply have been annihilated in some strange way," said William Fitzhugh, director of the Arctic study center at the Smithsonian's National Museum of Natural History.
Researchers obtained DNA from ancient human bone, teeth and hair samples from Arctic Siberia, Alaska, Canada and Greenland for the study. They also sequenced the genomes of two present-day Greenlandic Inuit, two Siberian Nivkhs, one Aleutian Islander and two Athabascan Native Americans.
A study of their genetics shows the Paleo-Eskimos were not related to Native Americans or the Inuit.
Known as the Saqqaq and Dorset people, these Paleo-Eskimos lived in small villages with just a handful of houses and 20-30 people in each.
Their population size is hard to know for certain, but researchers said it probably numbered a few thousand.
Given the uniformity researchers found in mitochondrial DNA, which comes from the mother, there appeared to be few women among them, and inbreeding may have been common.
"The occupational history of the Arctic is unique compared to other regions of the world," said Maanasa Raghavan a molecular biologist and researcher at the Natural History Museum of Denmark. "Cultural changes were brought about by movement of ideas and not new people coming into the region."
Experts say the Dorset people were known for their art and their skill in making chipped stone points and small blades. However, they are not believed to have possessed bows and arrows. They hunted and fished, and held ritual gatherings in traditional longhouses.
Still, Fitzhugh said archeologists "have a lot of trouble understanding their mindset."
History also has no known comparison for groups that stayed on their own for as long as they did.
"I think it's a very remarkable incidence of cultural stability and continuity. And I don't think you can find any modern example in the last 4,000 or 5,000 years quite like this," he said.