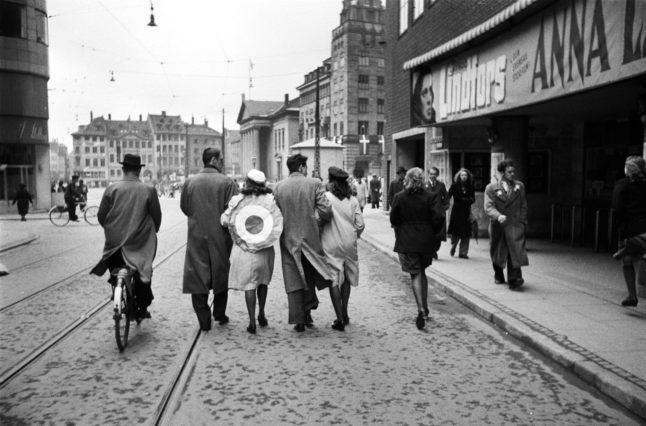 Danes displaying the colours of the British RAF on Nørrebrogade in Copenhagen following Denmark's liberation on May 5th 1945. Photo: Ulf Nilsen/Ritzau Scanpix

On May 4th, 1945, Denmark was liberated from German occupation.

The exact moment Danes knew that they had been freed from the five-year occupation came at 8:35pm, as a BBC broadcast from London interrupted regular programmes to announce the German capitulation as Allied troops marched towards the country.

came over the radio. A translation of the announcement follows:

With those words, the BBC’s Danish presenter Johannes G. Sørensen cut into regular programming to inform the Danish people that British Field Marshal Bernard Montgomery had just accepted the surrender of German forces at Lüneburg Heath, east of Hamburg.

Denmark would have to wait another 12 hours until the liberation officially took effect at 8am the following day, but the radio broadcast brought happy Danes out into the streets.

Some took the opportunity to burn the hated black window shades that had been used during bombing raids.

Today, the date is marked with the custom of lighting candles in windows on May 4th as a reminder of the five years when Danish cities spent their nights in total darkness.

In 1944, candle wax was in shortage, and it was in the years after the war that the tradition was established.

However, it is connected to the rejection of the blackout blinds and the ban on lights in homes and on streets at night during the occupation laws, enforced by Germany to prevent British aircraft from using the light for navigation.

In 2014, 41 percent of people asked in a survey said they still placed a candle on their window sill on May 4th, newspaper Kristeligt Dagblad wrote in 2016.

“That the custom of placing a candle in windows still plays a role shows that the public still feels something for this period in history,” Michael Kjeldsen, an external history professor at Roskilde University, told Kristeligt Dagblad in 2016.

Denmark’s liberation is officially marked on May 5th, as this was the date on which the German capitulation took effect.