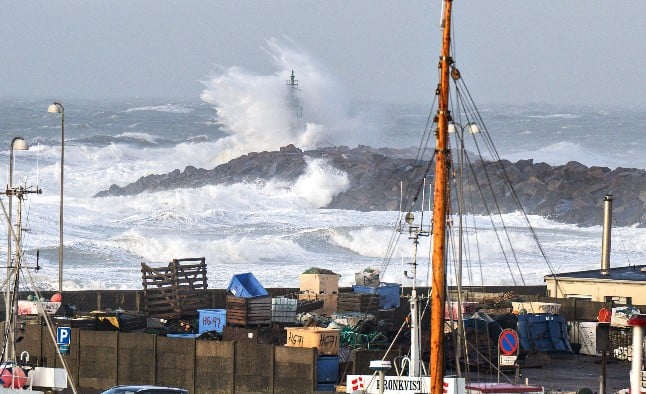 The storm started to hit Denmark at around 3pm on Saturday, and Trine Pedersen, a meteorologist at Denmarks’ state forecaster DMI, said that the winds would get stronger and stronger later in the evening, reaching maximum strength in the middle of the night.

“At first it will be a strong wind with strong gales, but early in the evening we will quite quickly probably reach a full storm on the West Coast, with gusts at hurricane force.” she told the Ritzau newswire. “In the rest of the country, it will more of a gale to a stormy gale, with gusts at storm force.”

Frederikssund Municipality to the north of Zealand has evacuated 20 elderly citizens, because of the risk that floods and storms might prevent them from receiving care.

The Great Belt Bridge between the Danish islands of Zealand and Funen will close from 10pm on Saturday until at least 10am on Sunday, while the Vejlefjord bridge is being closed to wind-sensitive vehicles.

Frederikssund’s mayor, Tina Tving Stauning, on Thursday warned people in the municipality to be careful. During Storm Bodil in 2013, the low-lying area of Zealand was hit by severe flooding.

“The most important thing is to save people. There should be no people being endangered because the floodwaters are coming,” she told TV2 on Thursday.

The elderly citizens in Frederikssund are being looked after at two elderly care homes in the municipality.

As well as the cancelled ferries, train company DSB is also cancelling trains on several routes: regional trains between Aarhus, Fredericia and Esbjerg will not run on Saturday night, and from Saturday at 4pm all traffic will be suspended on seven local train lines on the island of Zealand.

These include the Hornbæk line, the Gribskov line, the Nærum line, Lille Nord, the Frederiksværk line, the Odsherred line and the Tølløse line.