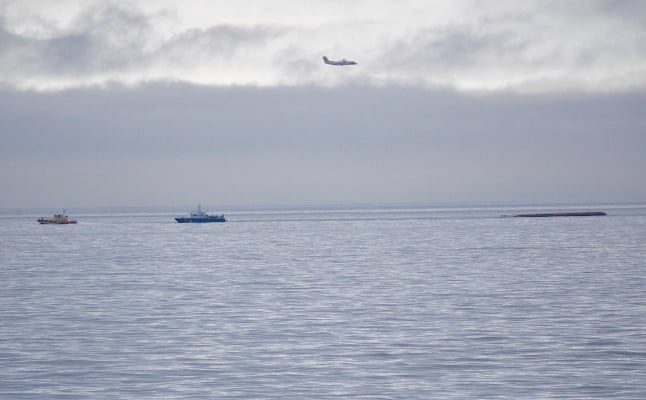 A major rescue operation is under way. Photo: Johan Nilsson/TT

“Shortly after half past 3am, we received an alert through our sea and flight rescue central that two freight vessels have collided between Ystad and Bornholm,” Carl-Johan Linde, head of press at the Swedish Maritime Administration, told AFP, adding that a rescue operation was under way to find two people that fell into the water.

Around 10.30am the maritime authority cancelled the search “at sea” for the missing sailors. The coastguard was towing the capsized Danish ship closer to shore to enable divers to scour the ship.

“We will be diving as if this is a lifesaving operation”, Angelica Anbring with the Swedish Rescue Service told AFP, adding that they were hoping to find an air pocket or something similar.

The Karin Høj, sailing under Danish flag, is 55 metres long and 9 metres wide. She left Södertälje in Sweden on Saturday and was en route to Nykøbing Falster in Denmark when she capsized, according to the site Marinetraffic.com.

British-flagged ship Scot Carrier was en route from Lithuania to Montrose on the Scottish east coast, according to Marinetraffic.com, although Linde told the AFP news agency that it was headed for the Swedish island of Gotland. It measures 90 by 15 metres.

Nine boats as well as a rescue helicopter were searching for the missing sailors in the cold water, Linde said.

Søren Høj, manager for the Danish shipping company operating one of the vessels, told AFP that there were two people in the crew and they were believed to be the ones missing.

The Swedish coastguard said that an investigation had been launched into recklessness in sea traffic, including suspicions of operating a vessel while under the influence. Rescue crews told Swedish news agency TT that early signs indicated the Danish ship had been hit by the larger ship.

Emma Valhem, spokeswoman for the Swedish Sea Rescue Society, said she did not want to speculate on the chances of finding the sailors alive.

She told AFP with water temperatures around 4C this time of year, the “situation is critical, already from the start.”

Operations to prevent oil or other hazardous materials from being released into the water were also under way.

“There is currently no ongoing oil spill,” Sweden’s coastguard said in a statement.

The waters around Sweden’s southern coast see heavy traffic, as all ships going into the Baltic Sea from the Atlantic need to pass through the strait between Sweden and Denmark.