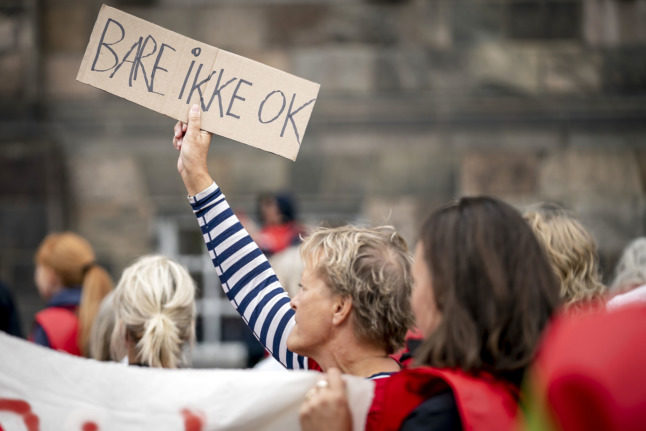 A nurse protesting outside the Danish parliament holds a sign saying that the government's intervention is "just not OK". Photo: Mads Claus Rasmussen/Ritzau Scanpix

What has Denmark’s government done?

On Wednesday, the government called a meeting of the country’s political parties to see if if could build the necessary 75 percent supermajority of MPs required under law for it to pass a bill through parliament imposing a pay deal on the nurses currently on strike.

According to Peter Hummelgaard, the government believes its proposal has the support of enough MPs to pass, despite the opposition of the Socialist People’s Party, the Red-Green Alliance, and the Danish People’s Party. This is because the Socialist Left party, which would normally be expected to oppose such a measure, has decided to back the bill.

The bill, tabled to go through parliament on Thursday, will impose the pay agreement reached in mediation between nurses’ unions and Denmark’s regional health authorities. The agreement was rejected by the union’s membership.

Why is this a big deal?

It was a sharp u-turn. As recently as Tuesday, Prime Minister Mette Frederiksen said she did not want the government to have to intervene, and so weaken the Danish tradition of wage bargaining between unions and employers.

“I know very well that it is a difficult time and a difficult situation, but our labour market model, which is completely unique and something very special and one of the main reasons why we have as good a society as we have, is based on a very clear division of tasks. When there is a legal [union] conflict going on, we politicians must take a step back.”

Why did they do it?

Denmark’s health minister, Magnus Heunicke, said at a press conference following a meeting with other parliamentary parties on Wednesday night that the nurses strike was causing a long backlog in medical treatment.

“For each week the conflict is allowed to continue, the backlog of treatments is extended by 10 weeks. It affects 200,000 patients,” he said.

The nurses began the strike on June 18th after a full 66.7 percent of the members of the Danish Nurses’ Organization united voted down a new agreement struck between their union and Danish Regions and Danish Municipalities.

Nurses have been slowly escalating the strike putting more and more pressure on the Danish health service.

What has the reaction been to the government’s intervention?

Grete Christensen, leader of the Danish Nurses’ Organisation, said that the move made her “angry”.

“One can only get angry at the government’s decision,” she said. “They have neither given us a pay rise now, nor a promise of money to catch up on the pay gap. We can see how the population recognises the nurses for their work, but this is not reflected at all in the actions of politicians. I seriously fear for our healthcare system in the future with this decision.”

Striking nurses filled the square outside the Danish parliament on Thursday morning to protest the move.

Mai Villadsen, who this February took over as leader of the Red-Green Alliance, called the move “a disgrace for Denmark’s welfare society”, summing up the ire felt by many on the left in Denmark.

Laust Høgedahl, associate professor and labor market researcher at Aalborg University, said he feared that the intervention would drive nurses out of the profession.

Kristian Thulesen Dahl, leader of the Danish People’s Party, called the intervention “horrible” and “wrong-headed” in a post on Facebook on Wednesday night.

“The nurses have not had an earthly chance to strike for better conditions, and the upcoming intervention will not benefit our welfare society.”

What does the deal now being forced through mean for nurses?

The deal that union members rejected in June, and which will now be forced upon them through a parliamentary bill, gives nurses a five percent pay rise over the coming five years, and will see a pay committee established to look at pay structures in the public sector.

Grete Christensen was still on Thursday seeking to extract a better deal at the last minute.

What does the decision to force the deal through mean for the general public?

The deal means that the nurses will have to return to work from Saturday, meaning the operations postponed on account of the strike will be able to go ahead.

In a press release, Anders Kühnau, the negotiator for Danish Regions, said that the intervention would be good for patients.

“Many Danes have had their hospital treatment postponed due to the conflict, and now we want to focus fully on getting all the postponed operations and examinations done as soon as possible,” he said.