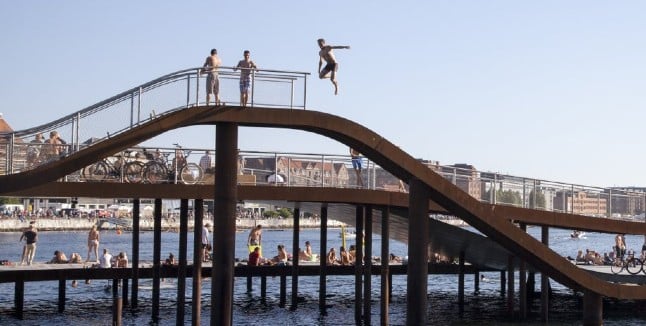 A swimmer leaps from a bridge in Copenhagen harbour. Photo: Kim Wyon/Visit Denmark

The Danish capital, which ranked eighth the last time the biennial ranking was produced in 2019, shot to the top partly because of the extra weighting given to “environmental security” in this year’s report, the authors from the Economist Intelligence Unit explained in the report.

“Copenhagen is definitely a worthy overall leader and Toronto a well-deserving runner-up, but as much because of long-term success in making residents secure as from any particular improvements in the last two years,” they wrote. “Toronto and Copenhagen do noticeably better in the new environmental security pillar than do any of the top-three cities from earlier years.”

The only one of the five criteria where the city led the way was on “personal security”, something both the authors and the city’s Lord Mayor Lars Weiss put down to the high levels of equality in Denmark.

“One key factor that makes Copenhagen such a safe city is its low crime rate, currently at its lowest level in more than a decade,”  Weiss said in a Q&A included in the report.

“We focus greatly on early intervention with preventive initiatives. Many of these are led through locally based cooperation between schools, youth clubs, social services, and the police – the so-called SSP [schools, social services, police] system.”

“It is a mixed city where both the cleaning assistant and the CEO meet each other at the local supermarket and have their kids in the same school,” he said. “This is one of the very cornerstones of Danish culture, and it contributes greatly to the high levels of trust and safety that we benefit from.”

He acknowledged, however, that the city did have a problem with “repeat youth offenders”, and was working extremely hard on  “gang suppression and intervention” so that vulnerable children and young people do not get drawn into crime.