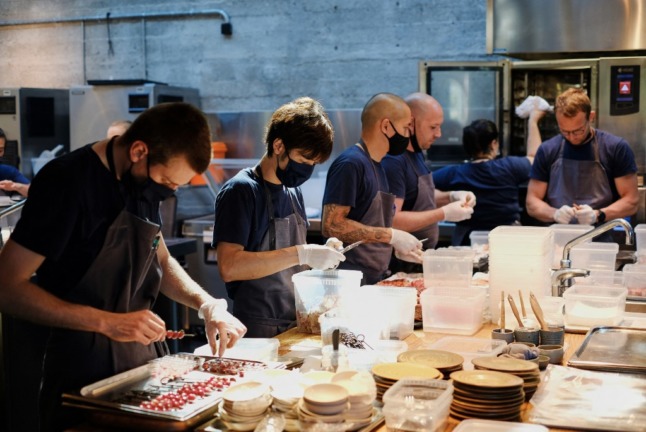 Personnel of the World class Danish restaurant Noma works in the kitchen on May 31, 2021 in Copenhagen. Photo: Thibault Savary/AFP

Despite regularly ranking among the top 10 on “The World’s 50 Best Restaurants” list, including number two in 2019 and number one for three years running from 2010 to 2012, Noma was not spared by the pandemic.

As it reopened this month, the restaurant that has been hailed as reinventing Nordic cuisine, reworked its menu — in part to take into account the lack of foreign tourists.

“I’m really excited. I need this. I need to have guests again. I need to feel like I’m here and I’m doing something, you know, I really, really desperately need it,” Rene Redzepi, who has been running the Copenhagen establishment since 2003, tells AFP.

The restaurant closed on December 9 and for its first dinner service since then, he chose to offer an exclusive menu to “heroes” of the pandemic: doctors, teachers or volunteers on the frontlines during the Covid-19 pandemic — with candidates selected by a public vote. An inside view of the World class Danish restaurant Noma is seen on May 31, 2021 in Copenhagen. (Photo by Thibault Savary / AFP)

The kitchens, bathed in sunlight, bustle with activity, accompanied by lively pop music, and the staff is busy arranging flower bouquets, washing strawberries and chopping up ingredients.

As they work in harmony and with astonishing fluidity, Redzepi says that creating a new menu was very straightforward.

“This time around things are more fluid, it seems a little more effortless. We didn’t struggle as much to get to this point,” he remarked.

In fact, the two-Michelin-star chef thinks the break might have been beneficial.

“Maybe it’s because we had six months where we could actually rest and our minds could be curious again,” he says.

“We spend a little bit more time with some of the stuff that we would maybe normally spend just a couple of days on… We had a whole week where we were just working on how can we carve vegetables,” she says.

On the menu until September, in addition to Norwegian scallops, red currants stuffed with herbs and raspberry ice cream tarts, the few who can secure a reservation can enjoy courgettes in a new form. The staff of the World class Danish restaurant Noma is pictured on May 31, 2021 in Copenhagen. (Photo by Thibault Savary / AFP)

“We have sculpted a courgette in a special way, which makes it easier to grill, because there is more surface area. And it’s also beautiful, a bit like a flower”, she says with a smile.

This year, seafood usually reserved for winter has also been added to the summer menu as it appeals to the Danish palate, Redzepi adds.

Opened in 2003, Noma has helped make Copenhagen a destination for gourmands.

In 2019, an estimated 38 percent of foreign tourists visited Copenhagen because of its culinary offerings before virus restrictions shut down the travel sector.

A lack of tourists forced the restaurant 108, also founded by Redzepi, to close.

Getting a table at Noma is no longer quite as challenging now.

“We’re still full, but we’re not full like we used to be,” Redzepi says.

But the chef believes things will return to normal quickly.

He doesn’t plan to change his focus on an exclusive experience either — even though he turned the restaurant into a wine and burger bar for a month in mid 2020.

But he does not rule out also welcoming less wealthy patrons to Noma’s gardens on the Copenhagen harbour.

“We actually did this barbecue menu where it was meant for people to come here, sit at long tables, eat barbecued meats, vegetables and fish… I can see that potentially happening,” he said.