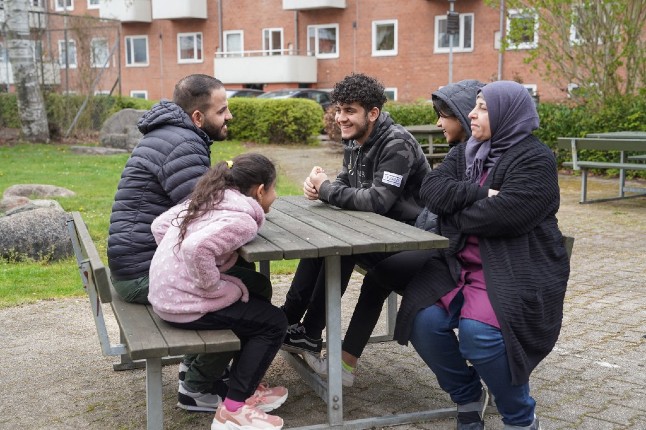 Sabriya al-Fayyad and her family sit outside on a public bench in Vejle in Denmark on May 5th. Photo: Tom Little/AFP

“I’m scared of returning to Syria, of this regime that killed my husband and his brother,” she tells AFP.

At the end of March, al-Fayyad and her two young daughters had their Danish residency permits revoked after the Danish authorities announced they now considered the Syrian capital “safe”.

Her two sons, who are old enough to be drafted into Syria’s military, were allowed to stay in Denmark.

“I’m scared of being arrested, that they’ll ask me ‘Where are your sons? They have to do their military service!’,” the 46-year-old says wearily, in
her tidy apartment in the western Danish town of Vejle. Here, she’s being treated for post-traumatic stress disorder, and is slowly learning Danish.

She’s worried about her girls — Shahed, 10, who sports a mischievous smile, and Tasnim, 12, the more serious of the pair. They’ve done all their
schooling in Denmark, and can speak Arabic but not write it.

“If they arrest me, who will take care of them?” she asks, adding that the family’s home in Damascus was bombed.

Al-Fayyad was granted a residency permit in 2016 because of the general unrest in Syria. But like her, at least 200 Syrians have had their residency permits revoked since mid-2020.

That’s when Copenhagen decided to re-examine the cases of about 500 Syrians from Damascus, which is under the control of Bashar al-Assad’s regime.

The Scandinavian country is the only one in the European Union to have come to such a conclusion, drawing international condemnation.

Abdo became the family patriarch when his father was killed in Syria. He came to Denmark first, in 2014. His brother followed, then his mother and
sisters. He’s doing everything he can to stop his family from being torn apart.

“The Danish migration (services) didn’t take into consideration that we’re a family,” says the newly married 27-year-old warehouse worker. He fears for his sisters’ welfare. “I took care of them, they grew up with me. They loved me like their father,” he says.

“In 2019, there was a shift, saying that when we allow refugees in Denmark as a starting point you are here temporarily (and) at some point you will have to go back,” the family’s immigration lawyer, Daniel Norrung, tells AFP.

That’s a hard line for a leftwing party determined to steal votes from the far-right, in a country where half the 5.8 million inhabitants see immigration as a threat.

“We have had increased integration problems… lack of employment, high crime rates, cultural clashes, and we don’t want to increase these problems,” argues Rasmus Stoklund, the Social Democrats’ migration spokesman.

Mohamed, Abdo’s 18-year-old brother, has felt lost since his family got the news.

“I go to school, I work, I’m getting ready to start upper secondary. I’m doing things right … It doesn’t seem fair,” he says in fluent Danish. Most of Norrung’s clients have to wait a year before finding out whether they have won their appeal. The Danish Migration Appeal Board has overturned around half of the cases so far.

The United Nations, the European Commission and NGOs have all harshly criticised Denmark’s decision, insisting that recent improvements in parts of Syria do not justify an end to the protection of refugees. But Copenhagen has refused to budge.

Last week, the Danish parliament voted by a large majority in favour of a declaration backing the decision.

“There are no reasons for people who are not personally persecuted not to go back now,” Stoklund maintained.
Abdo says that position is indefensible.

“When you say that Syria is safe at the same time that all countries in the world say Syria isn’t safe … it’s a lie,” he says.

Under Danish law, temporary residence permits are issued without an end date in cases of a “particularly serious situation in the country of origin
characterised by arbitrary violence and attacks against civilians.”

But they can be revoked once conditions are deemed to have improved. While no one can be expelled by force, in the absence of diplomatic ties
with Damascus the rejected Syrians are urged to leave voluntarily or be placed in an administrative centre until further notice.

Some 35,500 Syrians currently live in Denmark, more than half of whom arrived in 2015, according to Statistics Denmark.