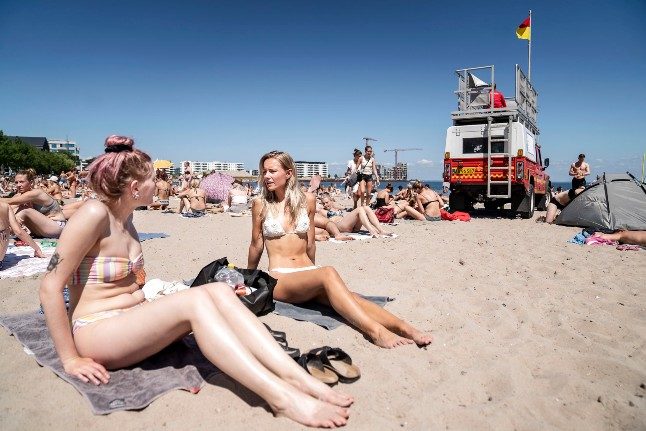 Is it time to hit the beach? Photo: Mads Claus Rasmussen/Ritzau Scanpix

According to the forecasts, a warm front is on the way in over Denmark which will bring temperatures as high as 20C on Sunday and up to 24C on Monday.

“On Saturday night, the heat is just going to sweep in over us,” said Morten Lynge, the weather forecaster for state broadcaster DR. “It could bring up to 21C in many places in the country, but along the coast, we will not reach such balmy temperatures.”

It’s a similar picture from Mette Wagner, a meteorologist at state forecaster DMI, although she warns that the heat and sun will be accompanied by sporadic rain.

“We are going to get a lot of showers, but there will also be room for the sun between the showers. So I wonder if some of us won’t also need to get our sunglasses when it breaks out,” she told the Ritzau newswire.’

People in Denmark can also expect some sunshine on Saturday, although it’s likely to get cloudy by the afternoon, with showers in some places.

“The day will start wet and cloudy, but the night’s rain will, fortunately, get pushed away by the heat. It will be warmest in the central parts of the country. It can easily reach 20C in Southern Jutland.”

On Monday, DMI is expecting even better weather, with temperatures of between 18C and a very summery 24C, although, again there will be some rain.

“But there will be a relatively big need for the sun cream on both days,” Wagner said.