A Chinese international student said she has been left traumatised after she reported herself to Danish authorities due to a visa overstay and was subsequently placed at Ellebæk, a detention centre for people without legal right to be in the country.

Bingzhi Zhu, a graduate student of Environment and Development at the University of Copenhagen, was scheduled to finish her studies in August 2020 but faced delays due to the Covid-19 pandemic and ill health so was given permission to hand in her thesis in May this year.

When she realised on December 30th that her study visa was about to expire (on December 31st), she attempted to contact the Danish immigration service’s Agency for International Recruitment and Integration (SIRI).

She was able to partially complete the application and paid the processing fee of 1,900 kroner, according to screenshots seen by The Local.

Under visa rules, she was also required to submit a statement from the University of Copenhagen. Because the authorities were closed for the public holiday, she called the police and was advised to wait.

“I tried to contact SIRI through email and phone call but they were on holiday and until today [February 11th, ed.] I still haven’t received any email from SIRI,” Zhu told The Local. She also called the police in early January after her visa expired to report the issue.

On January 5th, police were called to the Absalon Hotel, where she was renting a student room. She was subsequently arrested for overstaying her visa and, ultimately, detained at the controversial Ellebæk centre before eventually being deported from Denmark.

In written communication with The Local, Zhu described several instances of harsh treatment and possible discrimination at Ellebæk, a detainment facility that was last year slammed in a report by the Council of Europe's Committee for the Prevention of Torture.

Ellebæk houses migrants who are under arrest based on Denmark's immigration laws (Udlændingeloven), but not for committing crimes.

After being apprehended by police, she was taken to the Vestre Fængsel prison and later admitted to psychiatric departments at Amager and Bispebjerg hospitals. After a series of interviews with police and psychiatric consultations she was eventually taken to Ellebæk on January 29th. 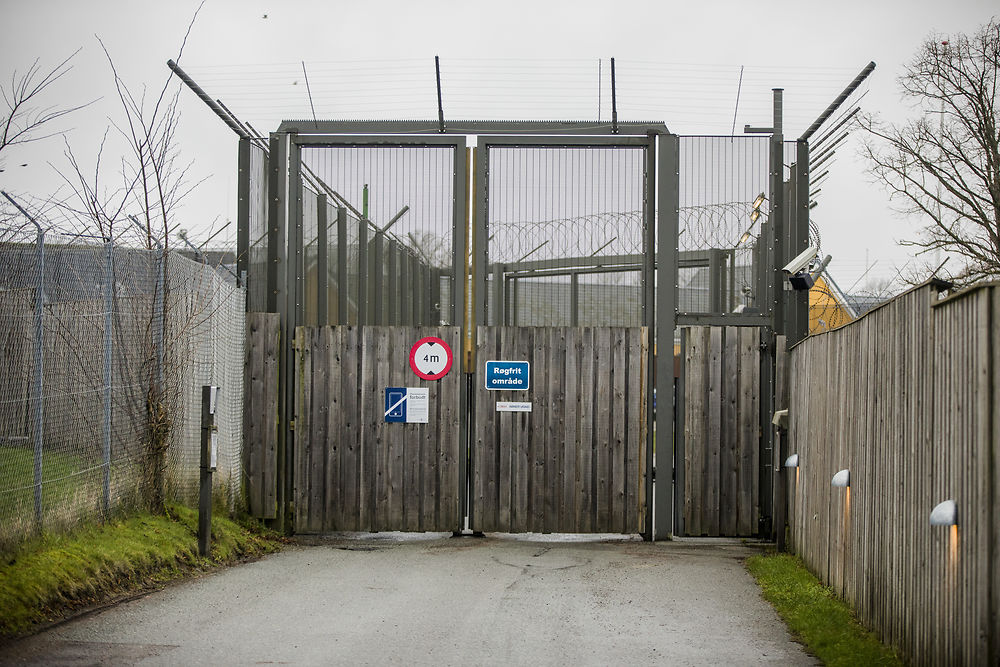 A 2020 file photo of the Ellebæk 'departure centre' for migrants and asylum seekers with no legal right to stay in Denmark. Photo: Nikolai Linares/Ritzau Scanpix

Later, she was placed in an isolation cell without warm clothes and was verbally humiliated, threatened and pushed by staff, according to her account.

Zhu, who says she has no criminal record in Denmark or China, told The Local she has suffered with depression, in part due to the circumstances in which she found herself in Denmark due to the pandemic. But she was not medicated at any time after being detained by police, she said.

“I’m a 24-year-old graduate student who paid a huge amount of tuition fees in Denmark, but I have now been in prison, a psychiatric centre and at a deportation centre,” she said.

She called Ellebæk “a jail and a hell”.

“Everyone in Denmark should know what happens here. I would rather be in prison or on the psychiatric hospital ward,” she said.

In social media posts describing her treatment at Ellebæk, Zhu describes several incidences of possible discrimination or humiliating treatment by some of the staff. The Local has been in contact with Zhu to confirm her account of the events.

These include being pushed by staff without provocation; a refusal by staff to use Chinese inmates’ names, instead referring to them as ‘China 1’ and ‘China 2’; and isolation without being given warm clothes or a Bible she had requested.

She told The Local that other staff, including medical staff, some female guards and three male guards, were “nice”.

An image of an information leaflet given to Zhu at Ellebæk outlines rules and daily routines for detained persons at the facility. The leaflet is in Danish with a few lines translated in handwritten English. 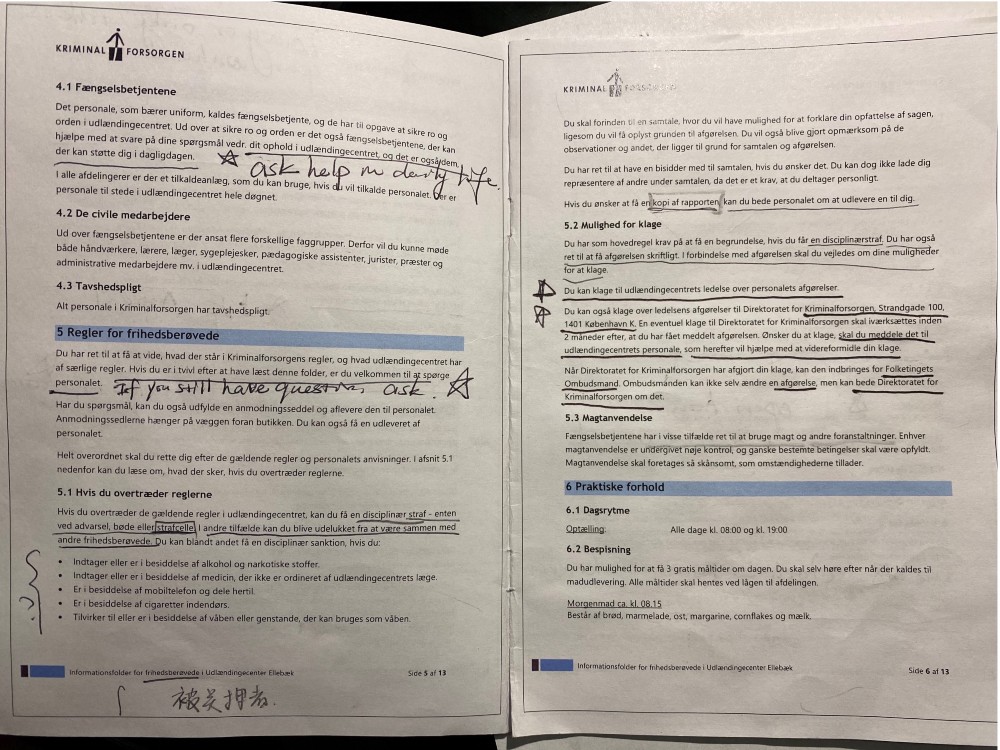 The Local has contacted the Danish prison service (Kriminalforsorgen) and the University of Copenhagen to request comment. This article will be updated with responses if we receive them. It should be noted that authorities cannot comment on individual cases due to data protection rules.

Annika Röckle, who studied with Zhu on international programmes at the University of Copenhagen, said she was “appalled” at her classmate’s treatment by Danish authorities, events she described as “traumatic”.

“It is unacceptable that Denmark operates Ellebæk in the first place, and I'm truly shocked that my friend and fellow student was met with such force from the authorities when her thesis was delayed due to the pandemic,” she said via email.

“Bingzhi is an incredibly fun, energetic and outgoing person. Her bubbly personality and great sense of curiosity means she easily connects with people and finds friends wherever she goes,” Röckle said of her fellow student.

“I hope that Bingzhi will be able to graduate and I expect the University of Copenhagen to provide every support possible to make that happen,” she also said.

The case has gained some political attention in Denmark.

Kristian Hegaard, the justice spokesperson and spokesperson for immigration with the Social Liberal (Radikale Venstre) party, last week submitted an official parliamentary question to the immigration minister, Mattias Tesfaye, over the issue.

In the written question, Hegaard asks whether the minister considers it to be “fair that a young Chinese student who was only in Denmark to study can end up in Ellebæk as a result of an expired visa, a place that has been strongly criticised by the Council of Europe’s torture committee for prison-like conditions?”

Tesfaye responded by saying he could not comment on the specifics of Zhu’s case but had asked ministry officials to look into what had taken place.

“I can say that my general view is that you should leave the country if you don’t have the right to be here. That is self-explanatory,” he said.

He added that he was “very satisfied” that authorities can detain people at Ellebæk if needed, for example to prevent them from going underground if they are not in the country legally.

“If the authorities have the opportunity to make a smaller intervention, they should of course do that,” he also said. The minister said he would not intervene in Zhu’s case personally.

Asked by Hegaard whether he agreed that students with expired visas should not be sent to Ellebæk, Tesfaye said that “I don’t think you can generally say that Ellebæk is not meant for students” because people who enter Denmark on study visas can stay once their permits have expired.

He noted that the decision to detain a person who is not in Denmark legally is always taken by a judge and said that, as far as he was aware, there had been no “administration in breach of the law” in the case in question or in other cases. The exchange between the two lawmakers can be viewed via the video link on the Danish parliament's website.

Hegaard told The Local it was “important” that international students come to Denmark to study and that their presence is beneficial to the country.

He said that people without legal right to stay in Denmark must leave under the law but, given that Zhu is a student and had contacted police herself, her treatment appeared “out of proportion”.

“You don't call the police if you're going to go underground,” he said.

Authorities can use milder measures, such as confiscation of passports, in response to foreign nationals who breach immigration laws.

“I don’t think the minister gave an entirely good answer, I can understand the minister can’t speak about the specific case but I would have liked to hear more about why a student can be put in Ellebæk” in circumstances like Zhu’s, Hegaard said in reference to the responses given by Tesfaye in parliament.

Tesfaye was not available for comment on the matter.

In early 2020, the Council of Europe's Committee for the Prevention of Torture (CPT) said Ellebæk was one of the worst facilities of its kind in Europe.

The centre in north Zealand was censured for poor treatment of residents – who have breached immigration rules but are not criminals.

“In our view it is unacceptable to keep people in (prison)-like conditions and furthermore with (poor) sanitary conditions and bad hygiene,” Hans Wolff, the leader of a delegation which visited Ellebæk in April last year, told broadcaster TV2 at the time.

“There are a lot of reasons why Denmark is proud of its human rights (record), but when you come to these places and you find such appalling conditions then one might question either the capability of Denmark to do it better or maybe the will of Denmark to do it in such a bad way,” he added.

“It is not compatible with human rights to keep people under such bad conditions in immigration detention centres,” Wolff also said.

Röckle questioned whether her friend’s treatment was a breach of human rights.

“I wonder if Bingzhi is the first international student this has happened to and I doubt that she will be the last. International students from outside the EU are paying tuition fees to study in Denmark, receive no SU [state student grant, ed.] and risk being treated with no regards to their human rights when visa issues occur,” she said.

Editor's note: updated to include comments from Kristian Hegaard.