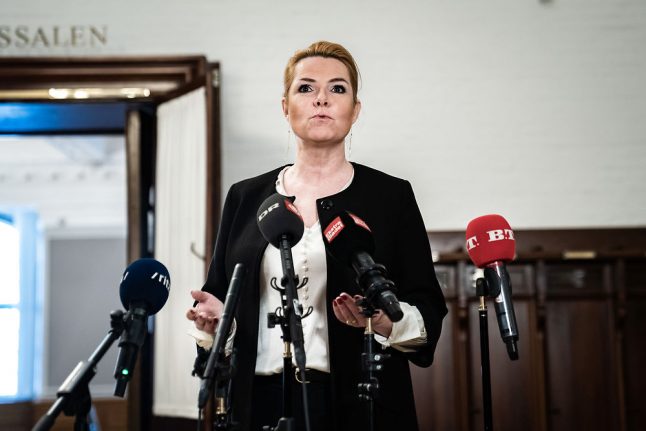 The impeachment trial, known in Danish as a rigsretssag, is a special court that tries and judges ministers charged with illegally executing their duties. Such a trial requires a majority in parliament to vote for it.

Støjberg, who recently stepped down as deputy leader of the Liberals over the case, was known for her hardline approach when in charge of the immigration ministry.

In 2016, she issued a directive to forcibly separate all married asylum seekers, without individual case assessment, if one of the couple was under the age of 18. The order was subsequently found to be illegal.

She was later found to have misled parliament over the illegal directive, and independent lawyers recently concluded there were grounds for an impeachment case.

The two largest parties, the governing Social Democrats and Støjberg's own Liberals, had yet to confirm whether or not they would back the trial, but both came out in support of it on Thursday.

All of the parties on the left wing, along with the right-wing Conservatives and Liberal Alliance, also back the impeachment trial. That leaves only the two far-right parties, the Danish People’s Party and Nye Borgerlige, opposing it. Former prime minister Lars Løkke Rasmussen, who recently announced he had left the Liberal party and is now an independent, had also said he would vote against.

“Initiating an impeachment trial is a very serious decision. It has only happened five times in (Danish) history,” Frederiksen said in a statement.

“An impeachment case is – as it should be – that final and ultimate tool in parliamentary checks on the government,” she added.

The Social Democratic decision was made on the basis of “clear legal assessments”, she also said.

Later on Thursday morning, Støjberg was dealt a further blow when her own party, the Liberals (Venstre) said they would also support the trial, which now already had enough votes to ensure its approval.

“I cannot live with the accusations that the Liberal party does not hold dear to law and order. When such charges are raised they must be clarified, and there is no other way than an impeachment trial,” the party’s leader Jakob Ellemann-Jensen said according to news wire Ritzau.

The Liberal party did not whip its 41 MPs, however, resulting in 9 voting against the trial.

Støjberg lashed out at Ellemann-Jensen following the announcement. Tensions between the two had played out for weeks over the matter leading up to the former’s resignation as deputy leader.

“I am disappointed that it is my own party leader… who is inviting the rest of parliament to initiate an impeachment trial against me,” she said in comments reported by Ritzau.

“That is also why I am considering what will happen. I can only state that it is how it is,” she added. Speculation has recently suggested Støjberg is considering a party switch, with both the Danish People’s Party and Nye Borgerlige likely to court the high-profile former minister, who garners huge numbers of votes at elections.

“The biggest vote of no confidence you can give to a colleague in parliament is to initiate an impeachment trial,” she said.

Støjberg has long been a divisive figure in Danish politics, not least because of her hardline policies and often-populist image while immigration minister.

Despite being a senior member of a centre-right, liberal party, she is also arguably the closest thing in Danish politics to a proponent of Donald Trump-like rhetoric. She recently used the phrase “drain the swamp” when addressing a demonstration against the government and has consistently sought to mischaracterise the nature of the enquiry against her by calling it the “child bride commission”.