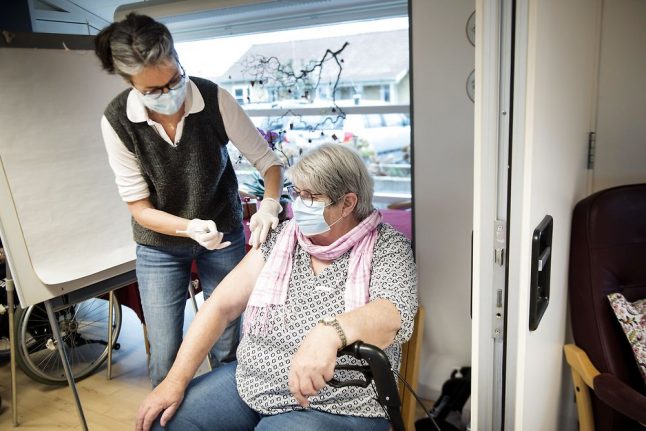 All residents at elderly care homes in Denmark will have received their first dose of the Covid-19 vaccine by today, provided they wish to receive it, national broadcaster DR reports this morning.

The country has already given at least one dose of the vaccine to around 1.09 percent of the population, according to recent data. That puts it at the front when comparing the speed of rollouts with other EU countries.

After 10 days of vaccination, some countries in the European Union are outperforming others by a factor of 100.

Denmark has administered a first dose to 1% of its population, against 0.01% in France. pic.twitter.com/J35tyhlL92

An increase in the minimum social distance required in public places increases today from one to two metres. The rule change was announced earlier this week, but takes full force today.

Specifically, the measure means that, in general, authorities now recommend a social distance of two metres, rather than one – in other words, it is not something that will be enforced, for example when out taking a walk.

However, supermarkets and other stores are affected, as they will have to reduce the maximum number of people allowed inside at any one time, in order to comply with the rule.

Outdoors attractions including zoos and amusement parks have been allowed to remain open under lockdown rules, provided they close off indoor areas. That changes from today.

The tightened restrictions announced earlier this week require the attractions to close entirely from today. Tivoli, Copenhagen’s famous fairground, makes no changes today, having made the decision to close weeks ago.

In what would be a shocking encroachment on Danish sovereignty, pro-China officials in Hong Kong want to arrest two Danish politicians who helped a pro-democracy activist from Hong Kong to travel to Denmark, according to a report by newspaper Politiken.

The two politicians, Uffe Elbæk (Independent Greens) and Katarina Ammitzbøll (Conservative), helped pro-democracy activist Ted Hui to enter Denmark as he fled Hong Kong by giving him a false invitation to an environmental conference, covering his intentions to go into exile, according to the report.

The local, pro-China government in Hong Kong has confirmed it is looking into legal options against people in Denmark who helped Hui, who is now in the United Kingdom, to flee, Politiken writes.

Danish foreign minister Jeppe Kofod told the newspaper that “Danish politicians can and shall naturally meet with whoever they want, without fear of reprisals. The government utterly defends that right.”