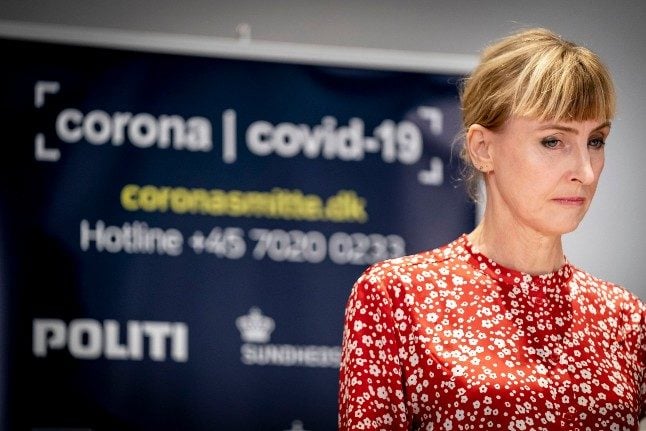 Tyra grove Krause, head of division at SSI. Photo: Mads Claus Rasmussen/Ritzau Scanpix
Tyra Grove Krause, head of the agency's research unit, told The Local that  her agency aimed to look closely at whether those infected with the new UK variant were more likely to spread coronavirus to others living in the same household.
“We want to look at household attack rates for this variant compared to other variants, but we only setting up these studies now,” she said.
“I think we'll need to wait a bit before we can get some valid results on this, one or two weeks or something like that.”
So far, she said, data from samples collected by SSI had not yet shown that the UK variant was 70 percent more infectious than other variants, as UK health authorities have estimated.
“We cannot see that the proportion of this new variant among the sequenced samples [is growing],” she said. “It's still quite stable. But maybe that's because we have this lockdown situation now, and because it's still at a very low level — in less than 0.5 percent of our sequenced samples.”
She pointed out that in the UK it had taken several months from the point at which the new variant was identified in September, before it began to increase exponentially.
“Maybe that's also what we are seeing in Denmark now, and then maybe at some point, it will really start to transmit when we have more people infected with it.”
READ ALSO:
Denmark discovers 33 cases of new Covid strain
Denmark extends ban on flights from UK due to Covid-19 mutation
Denmark bans flights from UK over new Covid-19 strain
Grove Krause said the detailed information Denmark has on its population meant SSI researchers could identify which people share a home, and then connect that information with positive test results.
“This means that we can follow transmission within households, or look at how many people test positive within a household when  an index case occurs,” she explained.
“This is something that we can follow at the national level, and then see whether the transmission rates within household changes in certain areas, for instance, because of a more transmissible virus.”
She said that there were signs that the UK variant was more common around the city of Aalborg.
“We have seen a higher proportion of cases in northern Jutland,  so that could be an area we would be interested to look further into.”
As well as studying the household attack rate of the new variant,  SSI had also increased its sequencing capacity and was also developing a modified PCR test which will be able to identify the variant — although she said the mutation picked up was also present in a Romanian variety and in some mink varieties that have developed in Denmark.
She said she hoped that the hard lockdown Denmark had put in place for the first two weeks of the year would keep the UK variant in check.
“We hope that we have this variant at such a low level and that these measures will prevent it from spreading further right now, but of course, we will follow the situation very closely.”
The early signs, she said, were that the lockdown imposed in mid-December was starting to bring the current surge in infections under control.
“It now seems that we've reached a peak in newly admitted patients, and we hope that that will decrease soon with the measures that have been put in place,” she said.
“But now we have a lot of uncertainties around Christmas, where, you know, the testing patterns change. So right now, it's a bit difficult to assess exactly where we are.”