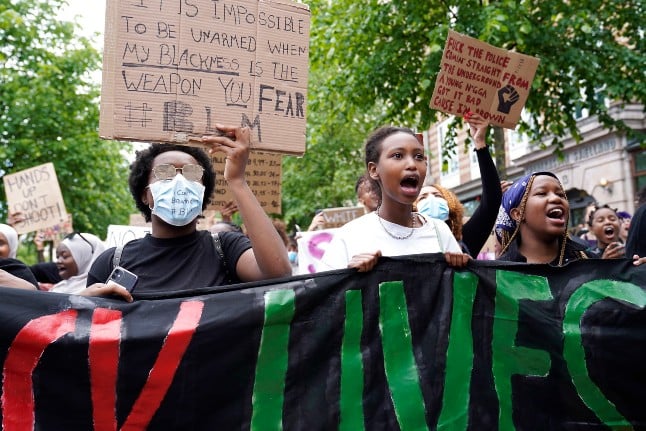 About 15,000 people joined the protest in Copenhagen: Photo: Nikolai Linares/Ritzau Scanpix
“There is no requirement or law that one should do it, but it is one's responsibility, one would assume, to use the testing capacity that is now in place and go and get tested,” Jesper Petersen, political spokesperson for the Social Democrat party, told the Ritzau news wire.
All adults in Denmark can now order a coronavirus test without even visiting a doctor, simply by logging in to the coronaprover.dk website.
Sunday's procession, part of a wave of global protests triggered by the death of 46-year-old George Floyd, started outside the American embassy in Copenhagen and then moved to Christiansborg, the seat of the Danish parliament.
The event was part organised by Black Lives Matter Denmark, and called for Denmark's government to speak out against the “brutality and murders by their close ally” the United States, and to “root out systemic racism in Denmark and the USA”. The protest drew about 15,000 people. Photo: Nikolai Linares/Ritzau Scanpix
The Socialist Left and Red Green Alliance parties both took part in Sunday's protests.
But Karsten Hønge, the Socialist Left party's political spokesperson told Ritzau he had been worried that so many people were not holding their distance.
“Of course you have hold an important political demonstration for 15,000 people outdoors,” he said. “But I think it is unbelievable that there's no attempt to keep distance. As far as I heard, no one at any point asked people to spread themselves out.” Some of the protesters were social distancing, but not many. Photo: Nikolai Linares/Ritzau Scanpix
Allan Randrup Thomsen, professor in virology at Copenhagen University expressed his concern about the numbers gathering ahead of Sunday's demonstration.
“If I look at it exclusively with my infection-spectacles on, it's a a problem,” he said. This is actually precisely the type of situation which would would prefer to avoid to stop the epidemic blooming up again.”
But Søren Riis Paludan, professor in virology at Aarhus University, was less concerned.
“The individual faces a very small risk,” he said. “It's more society as a whole which is running a risk, as we are trying to avoid superspreader situations.”
“But at the same time,” he said, “it is a basic human right to speak out, and with the number of infections we are seeing right now, we must be careful that the coronavirus does not become the thing that trumps everything else.”