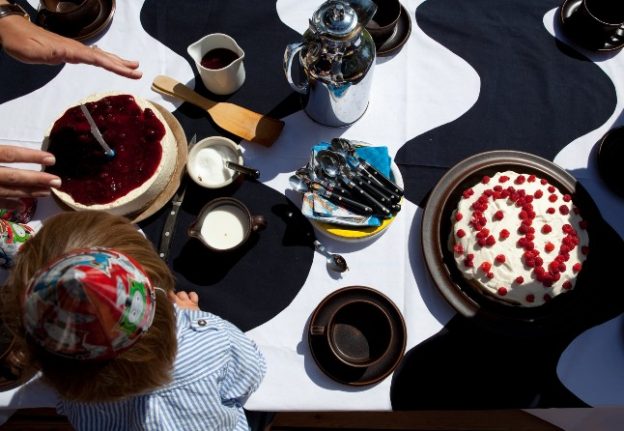 A typical birthday spread in Denmark (Dannebrog flag out of picture). Photo: Lars Plougmann/Flickr
The new guidelines, part of the country's so-called 'third phase', are set to be released on Monday under a political agreement on Denmark's reopening agreed with the other political parties, when the government has committed to raising the number to between 30 and 50 people.
So far, though, Prime Minister Mette Frederiksen has given no indication of how far the government is willing to go.
“The government has not yet decided, but will of course live up to the political agreement, so that clarification will be made regarding the level of assembly sizes and recommendations on parties,” Jesper Petersen, the Social Democrat party's political spokesperson, said in a message to state broadcaster DR.
Mette Abildgaard, group chairman of the Conservatives, argued that only relaxing to 50 would allow real events to be held.
“It will ensure that more and also slightly larger events can take place, and we believe that it is fully justifiable in relation to the rate of infection in Denmark,” she said.
Morten Østergaard, leader of the Social Liberal Party said people should be credited for continuing to keep social distance.
“Right now, common sense is prevailing, so people should also be allowed to hold a proper birthday or invite the class home for a children's birthday,”
Under the deal agreed on May 20, the parties agreed to a further relaxations of the gathering ban in July and August.
READ ALSO: