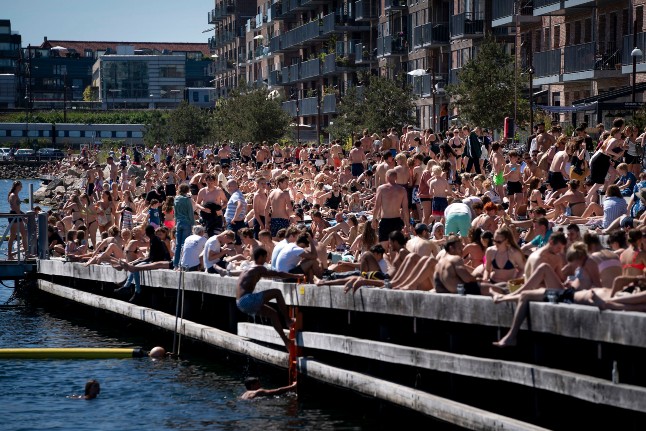 People swimming and sunbathing at Nordhavn (warning: telephoto lens may make people look closer than they were). Photo: Liselotte Sabroe/Ritzau Scanpix
Copenhagen police used Twitter and a press release to announce the ban on access to Sandkaj and Göteborg Plads, two popular bathing areas in the Nordhavn district.

“Over the past few days, we have seen a lot of citizens flocking to the area along Sandkaj and Göteborg Plads to enjoy the good weather,”  Anne Tønnes from the Copenhagen police told the Ritzau newswire.
“Unfortunately, we judge that there are too many who are not following the health authorities' general recommendations to limit the risk of infection from Covid-19, which is why we are now establishing a ban on gathering in the area.”
According to the Danish broadcaster TV2, after the ban was put in place at 12.30pm, many of the sunbathers simply crossed over to the opposite Marmorbyen.
“It makes almost no sense for them to close over there if they don't close over here too. After all, everyone just goes straight over here as soon as they're thrown out from there,” Anders Evald, a teenaged sunbather told the broadcaster.
The ban will last from Tuesday afternoon until 6pm on Thursday, with those breaking it risking a fine of 2,500 kroner.
According to the police, people can still cross the harbour areas to go swimming, but they must leave as soon as their swim is finished.
The ban will no longer be in place from Friday, when the current spell of sunshine is expected to end and be replaced by rain.
READ ALSO: