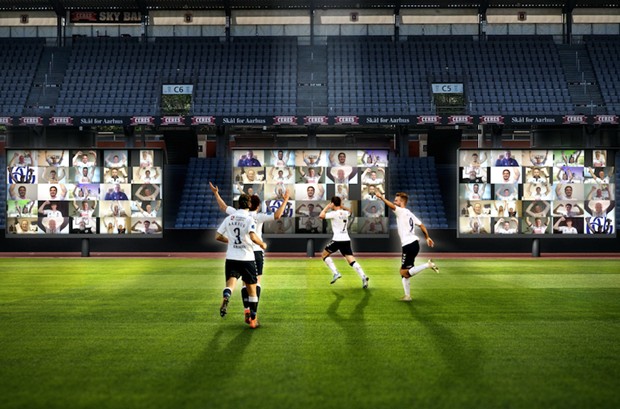 A digital mock-up of the Zoom virtual stadium. Photo: AGF
At 7pm, Aarhus AGF will kick off against Randers FC as Denmark becomes one of the first countries in Europe to restart its premiere league.
Two of AGF's players, Alexander Munksgaard and Niklas Backman, are quarantined. But David Nielsen, AGF's coach, told Politiken that he wanted social distancing to be the last thing on his players' minds.
“We just have to smash right on through the field. We have to let go of that caution,” he told the newspaper. “We can't 'slowly' start playing football again, because then we'll just get smacked in the head by our opponents.”
With no fans, AGF has instead partnered with the digital video platform Zoom to create a sort of virtual stadium, where fans can choose from one of 22 different sections — just like in a real stadium — and be able to cheer and hear the cheers of others through their computers.
Pictures of the fans will then be mounted on a huge screen in the stadium, so the players can see and hear them.
“It will be the first tournament match in a long time, and we are celebrating that with a historic digital initiative, and we are proud to be the first club in the world to use it,” Jacob Nielsen, CEO of AGF said in a press release.
READ ALSO:
It's not the only creative solution put in place by Danish clubs. Midtjylland  FC aims to use the parking lot outside its stadium for drive-in viewing, with the game against AC Horsens on June 1 set to be broadcast on huge screens.
The tickets have already sold out, and there will be lost going on besides football, with prizes for the best decorated car, food, and music.