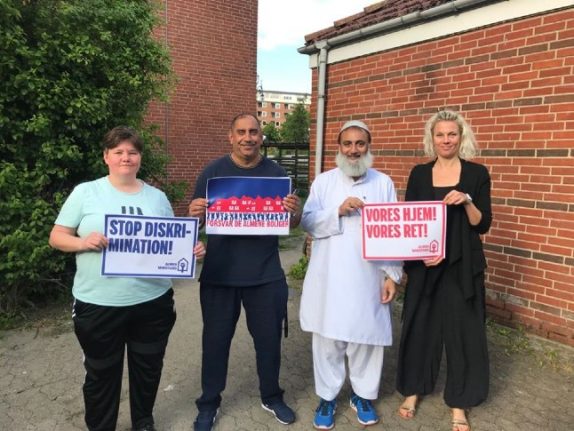 Some of the protesters from Almen Modstand
The idea, part of Denmark's controversial ghetto plan, is for the apartments to be instead leased to tenants with ethnic Danish backgrounds and so reduce segregation in the area.
Twelve tenants from the Mjølnerparken housing estate, who are being supported by the activist group Almen Modstand, on Wednesday filed the case with Copenhagen City Court.
Eddie Omar Rosenberg Khawaja, the lawyer representing the group, said that they was suing the Ministry of Housing for approving the development plan for the estate under the so-called 'ghetto plan'.
“It is in our view discrimination, because the determining criteria for a housing area being placed on the 'tough ghetto list' is based on whether more than 50 percent of the residents have a non-Western background,” he told The Local. “So that means that the decisive criterion is linked to ethnicity.”
The plaintiffs, many of whom have lived in Mjølnerparken for decades, are set to lose their homes as a result of the so-called 'ghetto plan', voted through by Denmark's last government, with the support of the now ruling Social Democrats.
As many as 228 familes are expected to be forced to leave Mjølnerparken, under plans to reduce the proportion of residents with a non-Western background.
Kaare Dybvad, Denmark's housing minister, said that the aim of the plan was to help reduce segregation and so help those with immigrant backgrounds better integrate.
“The overall aim of the legislation is to ensure mixed residential areas where you meet each other across social and ethnic divides, and where the children who grow up in Mjølnerparken and Tingbjerg have the same opportunities as everyone else in Copenhagen,” he said.
“It is just twelve residents out of the approximately 1,900 residents in Mjølnerparken who have chosen to appeal against a plan adopted by a large majority in the parliament,” he said.
“Of course, that's their right. I disagree with their claim, and so it's up to the courts to decide.”
Khawaja told The Local that although the case he had filed was only related to these 12 tenants, the same argument could be used by anybody forcibly evicted under the ghetto plan.
“If we succeed, then this would have an effect on in my view all other tough ghetto areas in Denmark,” he said.
“WE have raised issues which apply to all tough ghetto areas, and all development plans that have been passed or have to be passed connected to tough ghetto areas, because they are all linked to the criteria that 50 percent of residents have immigrant backgronds.”