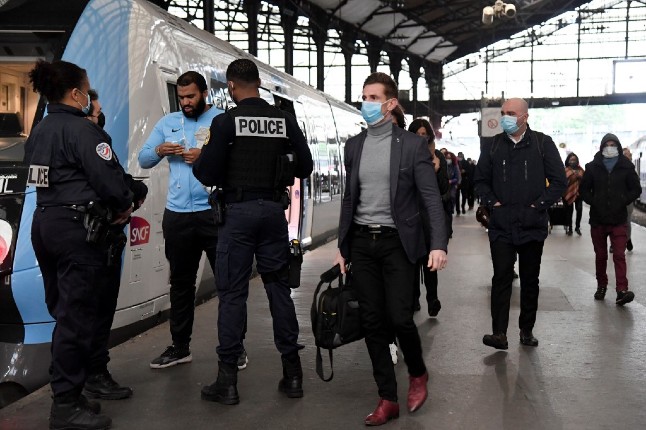 Commuters wearing protective face masks arrive at the Saint-Lazare train station on May 11. Photo: Niels Christian Vilmann/Ritzau Scanpix
The Danish Health Authority has from the start of the coronavirus pandemic advised the general public against wearing face masks in public, arguing both that the benefits are unproven, and that doing so risks making it more difficult for health authorities to source supplies.
“The Danish Health Authority does not recommend that healthy people who move around in public generally wear face masks,” the authority explains in a Question and Answer section on its website.
“This is partly because it is uncertain whether it has an effect on the spread of infection, but also because we must ensure that we will not lack face masks where they are most important, in the health and care sector.”
According to the Politiken newspaper, however, the Authority has over the past week changed this advice to remove a section claiming that “nothing suggests” that the masks have an effect on transmission of the virus when worn by the general public.
Henning Bundgaard, Professor in Cardiology at Copenhagen University, who is conducting a trial on the efficacy of face masks, told The Local that he believed Denmark was right to exercise caution.
“No one has any documentation that face masks outside hospitals work at all,” he said. “And I think it is rational to provide this documentation before we demand that people need to wear masks out in the open.”
He said that masks came with many disadvantages.
“It comes with a price for most people: You have to pay for the masks; it is inconvenient to wear it; is difficult to talk to people when you can't see their face; if people working hard, it can be hard to breathe, and we don't know how long a mask last for.”
Perhaps the biggest issue, he added, was that masks might create a sense of false security.
“If you feel safe, you might change your behaviour, maybe you get closer to people and maybe you don't wash your hands so often,” he said.  “So the achievement might be none, or you might be worse off in fact.”
He said he did not think that the issue of face masks was so urgent that Denmark's government or health authorities should demand them without requiring evidence of their effectiveness, even though his own study would not generate results until the end of June.
“It won't be too late,” he said. “We are talk about second and third waves of this pandemic.”
Governments around the world have increasingly begun recommending masks as evidence has increased that people with coronavirus can be highly infectious before they begin to show symptoms.
In a written response to the Politiken newspaper, Dan Brun Petersen, Director of Evidence, Training and Emergency Preparedness at the Danish Health Authority, conceded that people could be infectious even without symptoms.
“But we also know that the greatest risk of infection is from people with symptoms, especially from coughing and sneezing, ie. what one would normally perceive as 'sick',” he told the newspaper.
The European Centre for Disease Prevention and Control, the EU's infectious disease agency, at the start of April advised EU governments that masks could be helpful in reducing transmission.
“A face mask may help reduce the spread of infection in the community by minimising the excretion of respiratory droplets from infected individuals who may not even know they are infected and before they develop any symptoms,” it reported.
It added, though, that it was not currently recommending that people who do not feel ill, or who are not working in healthcare or other care roles, wear masks.
This came despite its acknowledgement that worn properly, non-medical and even home-made masks might reduce the spread of infection if worn by those with asymptomatic infections, even if they might not protect the wearer themselves.
WHO’s guidance on ‘Non-pharmaceutical public health measures for mitigating the risk and impact of epidemic and pandemic influenza’, also recommends face mask use in the community for “asymptomatic individuals in severe
epidemics”.