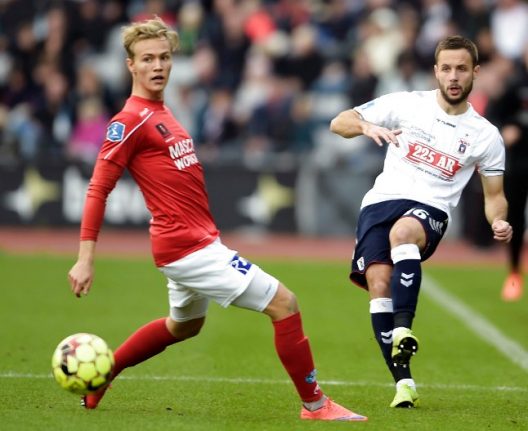 Aarhus AGF player Casper Højer Nielsen (on the right) playing Silkeborg last year. Photo: Henning Bagger/Ritzau Scanpix
Aarhus have teamed up with the popular videoconferencing platform Zoom to set up several groups calls that will see fans appear on a number of giant screens around the stadium.
“Since Friday, more than 4,000 people have reserved tickets,” Aarhus spokesperson Soren Hojlund Carlsen said on Monday.
“We want to involve the supporters and give them a community experience,” he told AFP.
Fans will be able to follow the match from their stand of choice, to be selected when making the reservation. The tickets are free of charge.
Aarhus, third in the table, are scheduled to play Randers on May 28 in the first game since the Danish league was suspended due to the coronavirus pandemic in early March.
League leaders Midtjylland have already invited fans to watch the matches on big screens in their stadium car park.