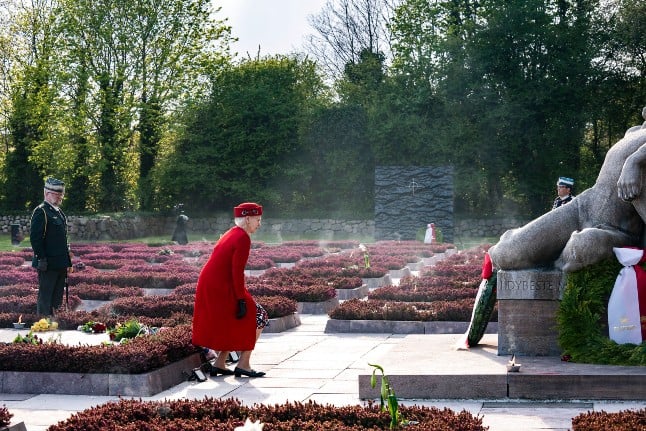 Queen Margrethe II paying her respects on May 4 at a monument to Danish resistance fighters. Photo: Scanpix
“As a country, we must never forget the efforts that were made to keep Denmark in Danish hands,” Denmark's Minister of Employment Peter Hummelgaard said, as he announced the “extraordinary honour payment” in a press release.
“It is a fact that over the years, a special group of our citizens has carried a heavy burden, with scars on both their bodies and their souls. That is why I am also really pleased to be able to offer this reward and put some extra force behind the words that express our gratitude.”
The 10,000 payment comes on top of the 16,100 kroner resistance survivors and their families will receive in the annual reward they have received ever since Denmark's liberation in 1945.
According to the press release, 830 people currently receive the honorary payment, of whom about 100 were themselves members of one of the country's resistance organisations. Frede Klitgård, who was chairman of Aktive Modstandsfolk, died in 2015. Here is phtoographed, age 91 in 2013. Photo: Niels Ahlmann Olesen/Årets Pressefoto 2013/Ritzau Scanpix
Denmark's resistance movement was initially led mainly by former members of the Danish Communist Party, who set up the BOPA (Borgerlige Partisaner or Civil Partisans) group.
It was later joined by the Hvidsten Group, eight of whose members were shot by firing squad in 1944, Holger Danske, 64 of whose members were executed by firing squad over the war, and the Churchill Club, whose eight members were teenagers in Aalborg, and the Danish Freedom Council.