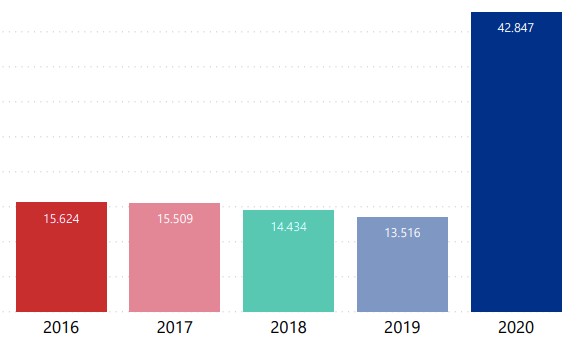 Unemployment has risen rapidly in Denmark. Source: Styrelsen for Arbejdsmarked og Rekruttering
Despite the Danish government's support package, many companies are opting to close down and send their employees home.
A total of 42,847 people had registered as unemployed in the period from 9th to 24th March, according to a statement from the National Board of Labor and Employment. On Tuesday 24th March alone, 3,096 people registered as unemployed.
Hundreds of immigrants in Denmark are among those who have lost their jobs, while thousands have been asked to stay home.
READ ALSO: It would be unfair to deport foreign workers hit by coronavirus lockdown
According to a survey of the members of our new Facebook group Corona Crisis impact on Income & Work Requirements for Visa extension & PR, 63 out of the 623 foreign workers who responded have already lost their jobs since the crisis began.
Similarly, 315 of the 623 foreign workers have been told by their employers to stay home until further notice.
Green card holders in Denmark are required to show an annual income of DKK 317,681 to extend their visa.
Similarly, those who have to apply for Permanent Residency (PR) permit have to show an annual income of DKK 292,256. They should have been in continuous employment over the preceding four years, working at least 120 hours per month.
Under the current circumstances, fulfilling these income and work requirements is almost impossible.
Although the Danish government has announced a generous package for employers and employees, this package still does not address the concerns of foreign workers. Foreign workers' right stay in Denmark will be at risk.
The annual income of many, perhaps most, of them, will still be considerably less than that required to extend their visas, secure permanent residency, or succeed in applications for family reunification.
The reasons why the government package will not help these immigrants are as follows:
1. Two jobs
The income requirement for visa extension, permanent residency and family reunification is so high that many immigrants are forced to take two jobs.
In most cases, one or both of these jobs are on part-time contracts. These are exactly the types of jobs which are lost in a time of crisis. Few employers will apply for the government support needed to keep holders of such jobs in employment at home.
One of our members last week lose both of her part-time jobs. Despite having two children, she is not eligible for compensation from the government. This will ont only affect her family's financial situation, but will also prevent her from applying for permanent residency for several years.
2. Companies cannot pay 25 percent
The current crisis is so deep that many companies are not even able to pay the 25% of employees' salary required under the government's rescue package, and have thus already been dismissed by their employers.
Foreign workers dismissed from these firms are not eligible for the government's packages. It is also not possible for them to find another job in the crisis situation.
They will thus not be able to fulfil their income and work requirements and might be deported to their home countries.
3. Many foreign workers are in the tourism, restaurant and hotel industries
These are the industries worst hit by the corona crisis and many foreign workers employed in these industries have already been dismissed and told they will receive no government compensation.
One green card holder who had worked in the tourism industry for five years was told on Monday 16th March to stay home until further notice from employer as there was no work.
It will be hard for him to find another job in the current crisis. His visa extension is due in December this year for which he has to show at least 12 months’ income. It will be unfair to ask him to show DKK 317,681 annual income.
4. Retail and commission-based businesses
In many of retail and commission-based businesses, employees' salaries are made up of their basic salary plus commission on sales.
One foreign worker who is employed at a clothing store in a shopping centre in Copenhagen has been fulfilling the government's income requirements after getting her basic salary plus commission on sales. Since businesses are lockdown, she have been told that she will receive the Govt. announced package but will not receive the commission. This will reduce her annual income and her visa extension will be at risk when she applies for extension.
Thousands of immigrants will be at risk of losing their visas or having their permanent residency or family reunification applications rejected if income and work requirements are not relaxed for all of those who have been the victim of this crisis.
Considering the current situation, the Danish government must come up with legislations which will waive the income and work requirements for visa extension, permanent residency and family reunification.